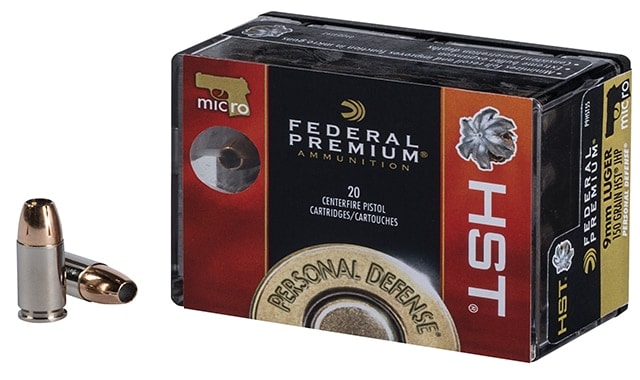 Recoil is a formidable issue with most micro pistols and many shooters find accuracy suffers on smaller platforms. A heavier bullet like, a 150 grain,  flies slower, but, depending on the specific load, can produce less recoil because it’s not loaded for high velocity. Less felt recoil often equates to greater accuracy on target due to less anticipation. Anticipating shots or flinching causes shooters push their gun forward, which almost always guarantees poor shot placement. By introducing a heavier round into the carry or personal defense equation and training, accuracy on a smaller platform could improve.

The Micro HST is a hollow point. Its construction, however,  differs from that of a standard hollow point. Instead of simply bonding the bullet’s core to the jacket, the more common method, Federal opted to create a cannelure that brings the core and jacket together. This method of binding prevents jacket separation and increases damage potential.

Federal said it tested the new 9mm load and offered details of its performance online. The 150 grain Micro HST reached 900 feet per second at the muzzle with 270 foot-pounds of force.

Hollow points are the preferred round among the personal protection crowd. The hollow points’ ability to expand upon impact creates a larger wound area while also reducing the chances of over penetration. Expanding bullets tend to stay inside a target better creating more damage and protecting innocent bystanders.

The Micro HST was introduced in 2015 with the announcement of a .380 round. Though reviews on the .380 were mixed, the HST has garnered enough attention to warrant the company’s steady addition of new calibers.

Federal has already started shipping the Micro HST 9mm Luger to distributors with a retail price of $31.95.