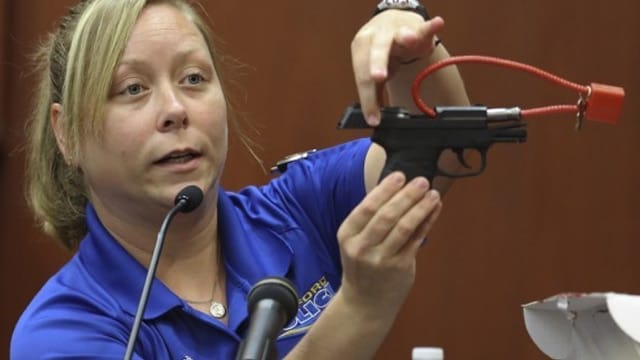 After a number of failed attempts, George Zimmerman on Tuesday auctioned off the gun that killed Trayvon Martin, according to the auction site that hosted the sale.

The United Gun Group, an online community-based marketplace, announced on Twitter that Zimmerman was in the process of vetting offers and verifying funds.

Details about the auction are unclear as two auctions were held at the same time. A public auction that topped out at $138,900 to a seller named “John Smith,” but the website confirmed that that sale was designed to attract fake bidders. The private sale netted an unspecified sum and bidders remain anonymous.

Zimmerman issued a statement in which he addressed “fellow patriots” who he thanked alongside the website and its members for supporting his endeavor.

Early attempts to sell the controversial item had been thwarted by online trolls artificially driving up the price and conflicting morals held by other businesses.

Zimmerman turned to United Gun Group after the much larger auction GunBroker.com pulled the listing, saying, “We want no part in the listing on our web site or in any of the publicity it is receiving.”

Zimmerman pitched the pistol, a Kel-Tec 9mm, as a historical item and even claimed the Smithsonian Museum expressed interest in owning and displaying it — a claim that turned out to be false.

In early 2012, Zimmerman was charged for the shooting death of 17-year-old Trayvon Martin at a gated community in Sanford, Florida.

Martin, who was unarmed, was allegedly mistaken for a suspicious person and Zimmerman, who was a neighborhood watch captain, followed suit, according to 911 tapes made by Zimmerman. However, the dispatcher told Zimmerman to back off, which he did, but the incident escalated shortly thereafter.

Zimmerman, who claimed self-defense, was acquitted of the charges in the summer of 2013. Although he did not invoke Florida’s controversial Stand Your Ground law, the incident put into question its necessity.

Since the acquittal, Zimmerman has had a string of  skirmishes that include other money making schemes and criminal allegations like domestic violence and provoked attacks.