Chris Cox to Clinton: 'You want to take our guns? Pack a lunch and give it a try' as NRA embraces Trump 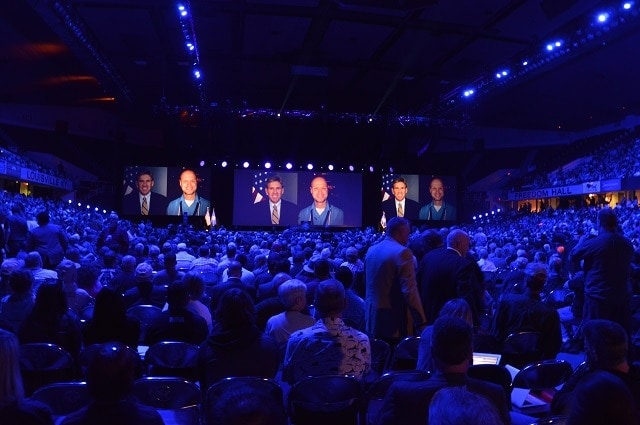 Preceding Cox’s speech was imagery of Ambassador Stevens, Information Officer Sean Smith, the two Americans killed in Libya in the 2012 attack on Benghazi, a recurring theme in the day’s speeches (Photo: Chris Eger/Guns.com)

The opening speaker of the NRA’s Institute for Legislative Action’s Leadership Forum in Louisville on Friday centered his singular focus on Hillary Clinton’s gun policy.

Interspersed with video of Hillary Clinton barking and references to Benghazi, NRA-ILA’s Executive Director Chris W. Cox opened the event with a broadside on the leading Democratic Presidential candidate.

First, Cox cited a potential threat to the nation’s high court, saying, “She’ll put a radical anti-gun justice in Scalia’s seat as soon as she can,” and “Mrs. Clinton has said that the Supreme Court got it wrong on the Second Amendment.”

Saying Clinton, “hasn’t taken a walk, a nap or a bathroom break without a good guy with a gun protecting her freedoms,” in years, Cox argued the former Secretary of State stood to turn this year’s presidential election into a “do or die fight for the Second Amendment.”

Then he threw down the figurative gauntlet to Clinton in front of the cheering crowd. 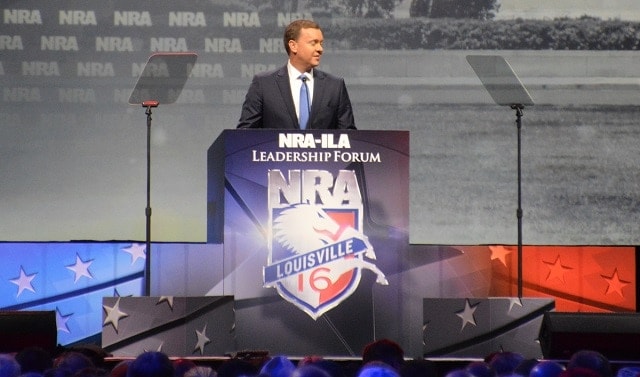 “You want to take our guns? Pack a lunch and give it a try. We’ve been here 145 years. We’re not going anywhere,” said Cox.

Notably absent from Cox’s speech was any mention of Vermont independent U.S. Sen. Bernie Sanders, though he did give a hat tip to the speech later Friday afternoon of the presumptive GOP candidate, Donald Trump.

“The choice for gun owners in this election is clear. And that choice is Donald Trump.  That’s why the National Rifle Association of America is announcing our endorsement of Donald J. Trump for President of the United States,” he said, introducing Trump to the stage as the next President.