HK's iconic MP5K will soon have a civilian-ready clone 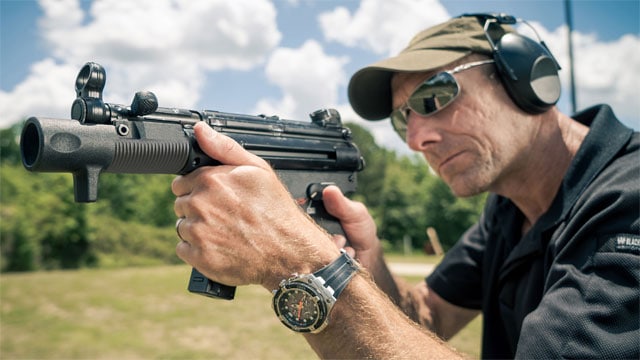 The new HK SP5K is a civilian reproduction of the famed MP5K. (Photo: Heckler & Koch)

Heckler & Koch will make lovers of the MP5K very happy at this week’s NRA Annual Meeting and Expo in Louisville as they introduce the SP5K, a 9mm that looks and feels like its submachine gun predecessor.

The SP5K brings HK’s celebrated roller delayed blowback operating system to a civilian sporting firearm. “The SP5K is a unique and historic HK pistol that captures the essence of the legendary MP5K but as a semi-auto handgun,” said Michael Holley, HK-USA Vice President for Commercial Sales and Marketing.

Ergonomics are integrated into the design, which includes a handguard to shield the shooter’s support hand and enable a solid grip. A bungee cord sling is included for support. “It’s a fun gun to shoot and goes a long way in recreating the experience of handling and firing a real MP5 subgun,” Holley said.

HK stayed true to the iconic MP5 style internally as well. The new pistol has precision-machined components and the same durable, hammer-forged barrel as the SP5K.

Capacity isn’t specified, however the magazines on company photos look remarkably like the original MP5K 30-rounders. The MP5K also has a 15-round magazine option. Given the clone-like similarities between models, it’s likely that magazines will be interchangeable between them.

The SP5K is only made at the HK Oberndorf factory in Germany.

HK calls the SP5K a sporting pistol, but the product description connects more dots on projected and recommended use. The pistol’s large size, proven dependability of the system with its predecessors, and excellent accuracy mean it’s a great choice for target shooting or household defense.

Users can choose from their own preferred accessories. There’s a Picatinny rail mount on the upper receiver for optics and/or optional sights.

A custom, lockable carrying case is included, as is HK’s limited lifetime warranty.

Though the new handgun will be on display this weekend, it’s not yet available to the public. Predicted availability is July 2016. MSRP will be $2,699.