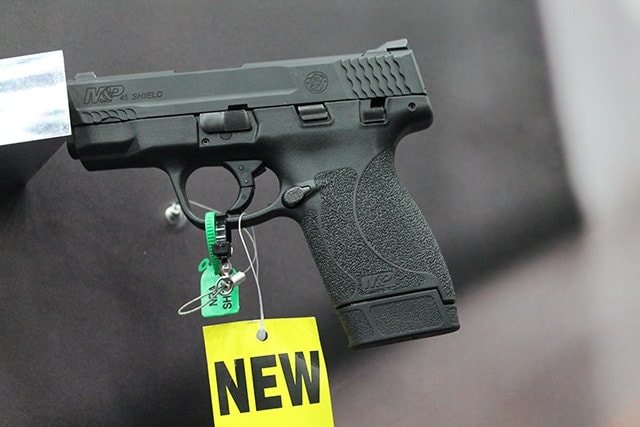 Smith & Wesson fanboys and girls received their wish today as the company announced expansion of the M&P Shield line with a .45 AUTO model set to ship this summer. The company made the announcement right as the doors opened at the NRA Annual Meeting in Louisville.

“The M&P45 Shield is based on the tremendous success of the M&P brand,” Jan Mladek, General Manager of the M&P line told Guns.com at the NRA Annual Meeting in Louisville. Smith & Wesson boasts over 1 million Shield customers to date.

The M&P Shield line, a popular pistol among law enforcement and concealed carry enthusiasts, was previously limited to 9mm and .40 S&W. The .45 version of the Shield maintains key attributes, like the slim and concealable platform, that fans of the M&P brand have come to love. The frame is 6.45-inches in length and under 1-inch thick, still giving concealers the ability to easily pack heat.

Despite its jump in caliber, the M&P45 is lightweight and easy to handle. The gun comes with two magazines, a 6 round flush version and a 7 round extended. Mladek said that though the 7 round gives more room to shooters with larger hands the 6 round mag is still comfortable. Fans of the M&P’s trigger will be pleased that the crisp, clean pull is still intact and no changes have been made.

While the M&P45 keeps to what made the original line so successful, engineers opted to enhance other areas of the firearm. A revamped, aggressive texture now coats the entire grip area, giving better contact between hand and firearm. Front cocking serrations are deep and easy to grip.

NRA attendees flocked to the Smith & Wesson booth on Friday after the .45 made its debut on the floor and a steady stream of attendees filtered in all day to see the new pistol.

Mladek said the idea for the new model was championed by consumers who repeatedly begged for a .45 model. “Every show, we had people asking for a .45 and we listened,” he said.

The timing of the announcement, to coincide with the NRA Annual Meeting in Louisville, was also a meaningful one for Smith & Wesson. “We unveiled the original M&P Shield four years at the NRA meeting in St. Louis and here we are four years later unveiling the M&P45 Shield in Louisville,” Mladek said.

The M&P45 Shield is sold with Smith & Wesson’s limited warranty and lifetime service policy. The pistol retails for $479 and will begin shipping in June.