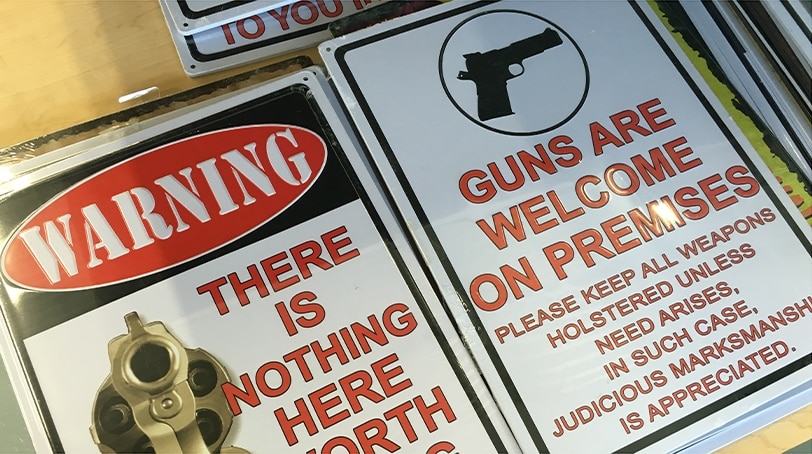 Pro-gun signs sit on the shelves of the Master Pawn of Horse Cave in Horse Cave, Kentucky, about an hour south of where the NRA held its annual convention over the May 20, 2016 weekend. (Photo: Jared Morgan / Guns.com)

The cheer of the crowd was almost deafening when he said it. Though it wasn’t the first time the likely Republican presidential nominee announced his plans to get rid of gun-free zones, the crowd of several thousand in attendance of the NRA’s leadership forum ate it up on Friday and waited in anticipation for seconds.

For Second Amendment advocates, the gun-free zone is an easy target for would-be bad guys, a fish-in-a-barrel proposition giving them easy access to a greater amount of victims in one convenient package. And bad guys don’t follow the rules anyway, so why would they heed a sign asking them not to carry their firearm or arsenal on the premises? For gun owners’ thinking, a magic sign won’t prevent mass shootings and could actually encourage more.

So can Trump actually ban gun-free zones? Yes and no, says John Lott, Jr., a pro-gun economist and president of the Crime Prevention Research Center. Though there is controversy surrounding some of Lott’s findings, his work still serves as a basis for many pro-gun arguments.

“Trump would need to get a bill passed by Congress,” Lott told Guns.com Monday. “I believe he said that he would do this as soon as he got into office, but it would take some time. He couldn’t do it right away and if Dems take control of the Senate there is no way he would accomplish it.”

The Trump campaign has effectively turned the candidate into a Second Amendment champion. In January, he announced he would eliminate gun-free zones on schools and military bases.

“My first day, it gets signed, okay? My first day. There’s no more gun-free zones,” Trump said at the time.

His campaign did not respond to a request for comment by article publication.

The presumptive Republican nominee, recently NRA-sponsored, has continually repeated the pro-gun lobby stance that gun-free zones are magnets for the mentally ill prone to violent whims.

Trump issued his second position paper on the Second Amendment. It touched on fixing what he called the broken mental health system, defending gun owners against gun and magazine bans, background checks and seeks to bolster their right to carry nationally. Though it didn’t list gun-free zones per se, the position paper did advocate for arming the nation’s service members on military installations.

A 2015 Everytown for Gun Safety analysis of FBI data on shootings found that 71 percent of the 133 incidents between January 2009 and July 2015 took place in private residences. Only 38 of the shooting incidents occurred in public spaces and of those about 21 were in places concealed guns could be lawfully carried. Only 17, or 13 percent, of the shootings took place in public spaces considered “gun free,” the report found.

Of course, Lott’s website calls the Everytown report misleading and full of errors. Lott also takes issue with how the report “muddles” the mass shooting debate by including those incidents which occurred in public and private spaces.

“Anyone who has read the diaries or seen the statements of these mass public shooters knows how they explicitly target gun-free zones,” Lott told Guns.com. “They want to kill as many people as possible and they know that the faster a gun arrives at the scene the faster they will be stopped. Since 1950, almost 99 percent of the mass public shootings have taken place in areas where general citizens can’t have guns.”

Everytown, a gun control group funded by advocate Michael Bloomberg, has its own criticisms of the pro-gun lobby’s claims and even calls Lott out by name, saying his analysis of mass shooters’ intentions are way off.

“There is no legitimate evidence that mass shooters target so-called ‘gun-free zones’ – in fact, we’ve been tracking mass shootings since 2009 and found that only 13 percent have taken place in ‘gun-free zones,'” Ted Alcorn, research director of Everytown for Gun Safety, told Guns.com in an email. “What’s more compelling is that in 57 percent of mass shootings, the perpetrator killed a current or former intimate partner or family member. That’s why we’re working hard to keep guns out of dangerous hands like those of domestic abusers, people with dangerous mental illnesses and felons.”