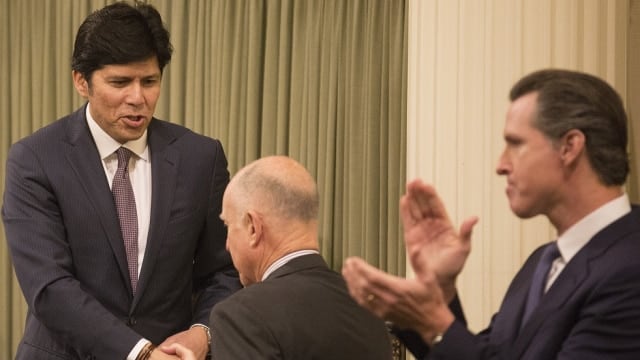 The California Assembly will soon take up a legislative package pushed by the state’s powerful Senate president in an effort to beat Lt. Gov. Gavin Newsom’s ballot initiative to a gun control knockout blow.

The proposals, being rushed through Sacramento by Senate President Pro Tem Kevin de León include five measures crafted from gutted and amended zombie bills left behind by the resignation of a fellow Democrat.

All passed the Senate last week in muscular party-line votes as de León, is locked in race to deliver his package to the governor’s desk before Newsom’s Safety for All voter referendum, continues to gain steam.

“I am grateful Lieutenant Governor Gavin Newsom has kept gun control on the front-burner with his initiative and he has done California a great service by inspiring the Legislature to act,” said de León in a statement. “Given the complexity of firearms policy, I believe the legislative process is the most responsible path forward. We owe it the voters to tackle tough issues and not force them to do our jobs for us.”

The measures include restrictions and mandatory registration on “ghost guns,” retroactive bans on currently grandfathered firearms and magazines going back to 1899, outlawing the use of “bullet buttons,” founding a state-run Firearm Violence Research Center to study gun deaths as a health care issue, making all gun theft a felony offense, criminalize loans of guns between friends and requiring the reporting of stolen guns.

Finally, three bills in the package would change how California defines ammunition and mandate background checks for ammo purchases as well as collect and save sales information.

Gun rights advocates in the state are denouncing the apparently blatant rush by de León to cut off Newsom, who aims to be the next governor and is seen by many as the senate leader’s most viable political rival.

“It is nothing short of unconscionable that millions of law-abiding Californians are being used as chess pieces in a twisted political game to see who can race to the bottom first,” said Craig DeLuz, legislative advocate for the gun rights group Firearms Policy Coalition, in an email to Guns.com. The group has classified the package as a “Gunpocalypse” due to its sweeping nature.

“The political class needs to know that law-abiding gun owners are not second-class citizens and the Second Amendment does not protect a second-class right,” said DeLuz.

An ally of Newsom, California Attorney General Kamala D. Harris, who was the district attorney of San Francisco while the current lieutenant governor was mayor, broke ranks and released a statement supporting the legislation.

“An epidemic of gun violence has cost too many Californians their lives and jeopardized public safety for too long,” said Harris, who is running for the U.S. Senate seat being vacated by Democrat Barbara Boxer in the upcoming election. “As California’s chief law enforcement officer, I see the urgent need to pass sensible gun safety legislation that aims to keep our streets and communities safe. This is why I am working with members of our legislature to pursue these common sense policies.”

All 11 bills are now on their way to the Assembly, and could be voted on there as early as this week. Approval would send them to the desk of Democratic Gov. Jerry Brown. Currently in his fourth term, Brown, 78, has vetoed several of the proposals in the past including de León’s own ghost gun legislation in 2014.

“I appreciate the author’s concerns about gun violence, but I can’t see how adding a serial number to a homemade gun would significantly advance public safety,” said Brown on that occasion.