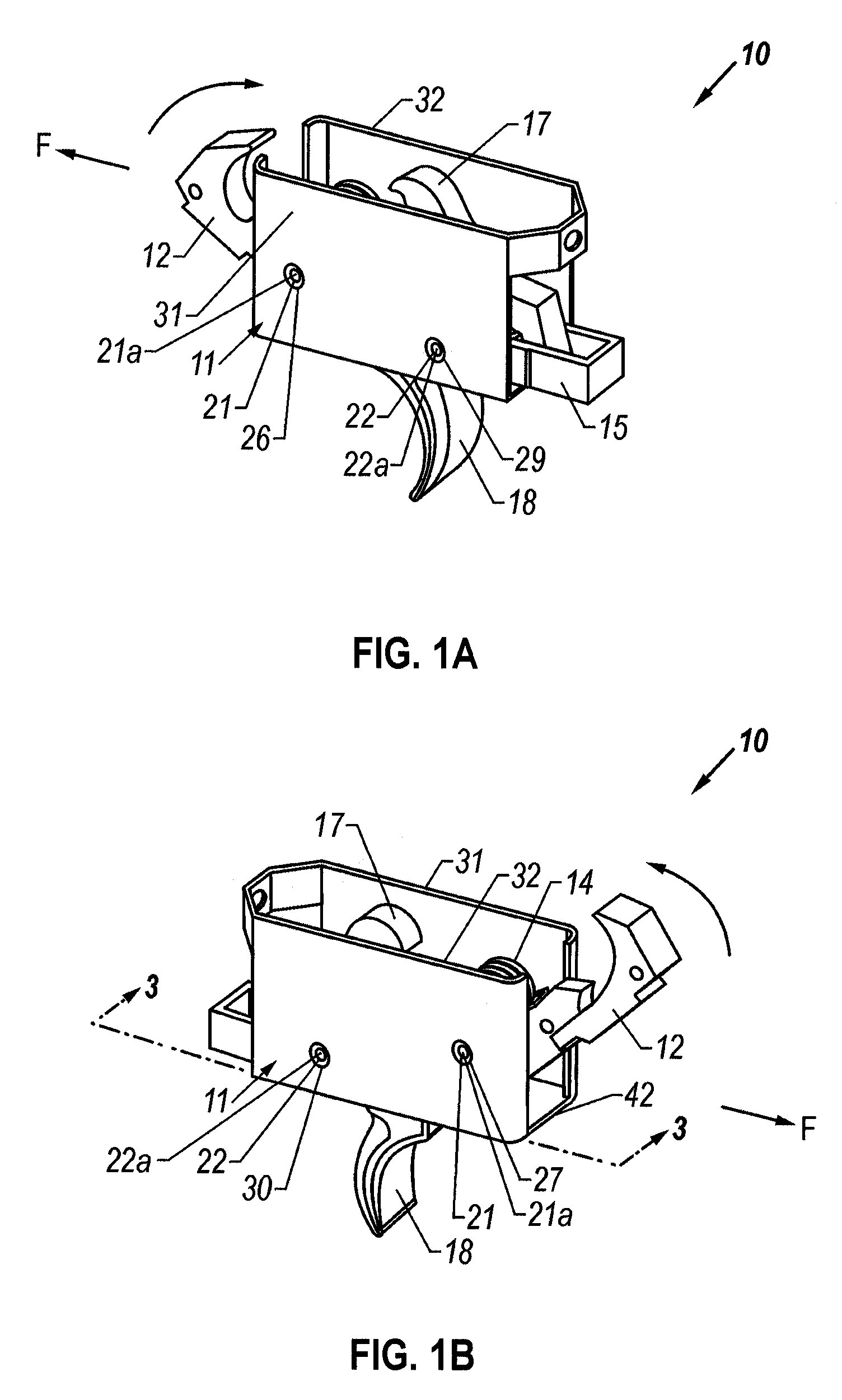 Patent drawing of the “modular trigger group for firearms,” or U.S. Patent 7,293,385 B2, invented by Michael L. McCormick. (Photo: USPTO)

Although claims and context of infringements vary, each case cited a single patent that covers a modular trigger group, or drop-in trigger, that can be used as a substitute for the factory installed mechanism on an AR-type rifle, according to documents filed in a Connecticut federal court on May 18 and 19.

The lawsuits say Mossberg “has suffered, and continues to suffer, irreparable harm for which there is no adequate remedy at law” because of the patent violations. In each case, Mossberg has asked for treble damages — a total to be announced in court — plus legal fees.

According to federal court rules, defendants have 20 days from when they were summoned to respond to the lawsuit. Those named in the cases include companies that specialize in aftermarket triggers, among other products.

While the patent may justify Mossberg’s legal action, firearms patent attorney Bennet Langlotz said defendants may also be able to challenge it. In 2015, the U.S. Patent Office renewed the trigger patent after a re-examination at the request of Timney Triggers, a company subject to a separate ongoing lawsuit with Mossberg.

“The patent has survived a re-examination challenge once, and there are others filed since. But surviving re-examination does not make a patent immune to further challenge, including as a defense in a lawsuit,” Langlotz said. “I suspect that whether the defendants band together for one more effort to invalidate the patent will depend on how reasonable of a royalty rate Mossberg is demanding.”

“Whether or not this patent is ever found invalid, it’s clear that something that anyone looking at it — who understands the principle — might realize there’s a real question about validity here,” said Langlotz, who is not involved in the lawsuits but has familiarized himself with them. “It’s a really interesting case”

As for why the company filed all 12 cases at once, Langlotz said it may be a question of strategy. “Sometimes companies will go after the weakest infringer so they can really win big and then set a precedent,” he said. “And it’s very possible that they have already … with public litigation or perhaps just negotiation where they ended up getting a royalty rate.”

Mossberg’s general counsel, Joseph Bartozzi, had a much simpler explanation for filing in bulk. “We’re just trying to be efficient with our use of time,” he told Guns.com.

Bartozzi described the lawsuit as protecting fair business practices, especially for Mossberg customers that pay to use the patent. “If we don’t make it equal and fair for everybody, the ones who do play by the rules will suffer,” he said.

One such company, CMC Triggers, echoed his sentiment in a statement defending the company’s taking matters to court. “Fair competition in the marketplace is only fair if the playing field is level,” said Jack Biegel, the company’s president.

“We proudly stand with them in their pursuit of what is right in regard to all the companies that infringe on their patent,” Biegel said. “Shame on anyone that would spin negatively O.F. Mossberg exercising their right under law to collect royalties.”