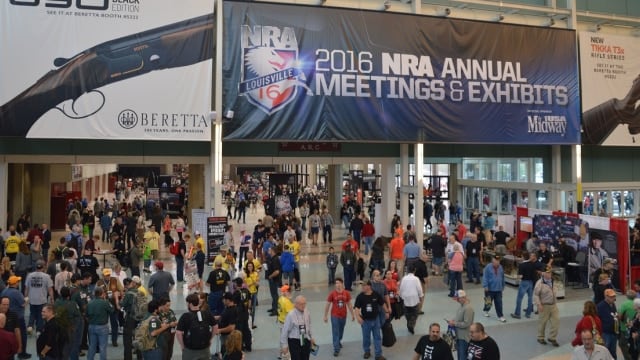 Over 80,000 were on hand last weekend for the NRA meeting in Louisville, pumping an estimated $53 million into the local economy. (Photo: Chris Eger/Guns.com)

The 145th National Rifle Association’s Annual Meeting and Exhibits last week in Louisville was the largest since 2013 and came close to breaking the organization’s record.

“I will let the numbers speak for themselves,” Arulanandam said.

A big draw for attendees at this year’s event, besides the over 400,000 sq. ft. of vendors at “Freedom’s Safest Place” was a promised speech by the presumptive Republican Presidential candidate Donald Trump. Crowds queued patiently in the rain for hours to pass through Secret Service checkpoints at the nearly 20,000-seat Kentucky Exposition Center’s Freedom Hall to hear the New York businessman.

At last year’s NRA Meeting in Nashville, Trump gave a cautious and at times awkward eight-minute speech in which he tapped in his sons to speak on his behalf. His speech this time around went over 30 minutes and included a more direct attack on gun free zones and the perceived Second Amendment threat from Democratic front runner former Secretary of State Clinton whom Trump dubbed, “Heartless Hillary.”

As reported by WLKY, the show was expected to deliver a $53 million economic impact to the Louisville area, a healthy increase from the $4.8 million the last time the event came to town in 2008.

The annual gathering has put some impressive figures on the board in recent years, while those assembling in protest have struggled to produce significant crowds.

At the 142nd NRA Annual Meetings and Exhibits at the George R. Brown Convention Center in downtown Houston, Texas in 2013, Guns.com staffers ran into about 40 protestors while the show’s attendance stood at 86,228– the current record holder.

In 2014, the Trade Show News Network announced the NRA show was among the top 25 fastest growing trade shows in the country, though attendance at that year’s event at the Indiana Convention Center in downtown Indianapolis drew 75,269, a slight decline from the Lone Star State’s record. That event saw about 120 planned demonstrators that included a “stroller jam” at the Indiana War Memorial followed by a “Quilting bee” for the “Mothers Dream Project.”

Last year’s NRAAM in Nashville’s Music City Center saw 78,865 in attendance while Guns.com documented about 100 protesters at a nearby park.

In Louisville on Saturday, Everytown for Gun Safety and the Kentucky chapter of Moms Demand Action held a screening of a documentary critical of the NRA a few miles away from the gun right’s group’s meeting. About 100 were found in attendance when Guns.com stopped by.

Next year’s meeting is scheduled for Atlanta, Georgia on the last weekend in April. 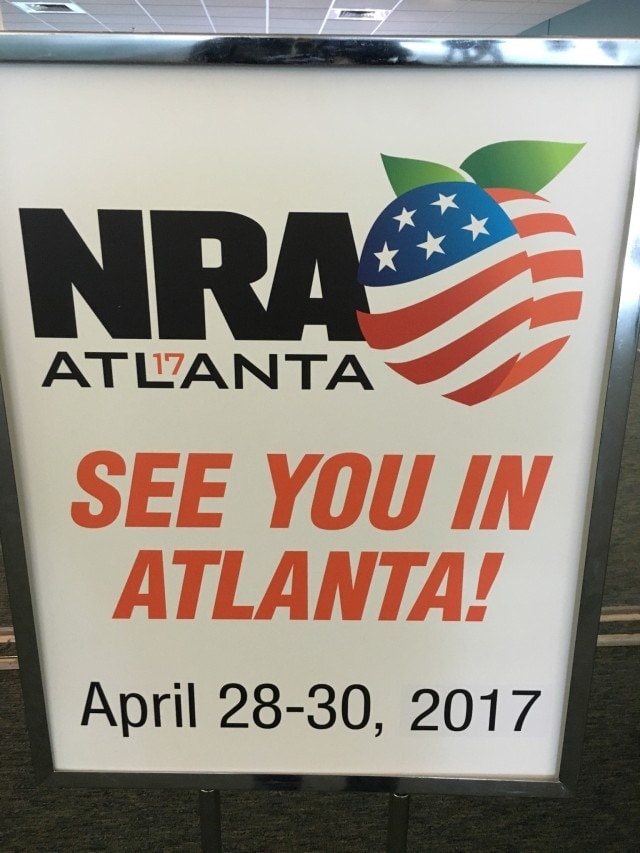