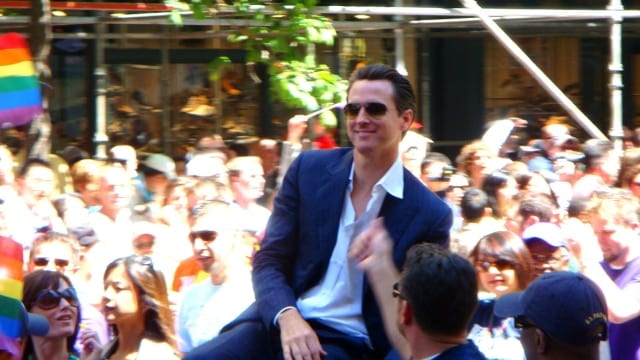 An LGBT gun rights group is firing back at Gavin Newsom over comments he made on social media bashing opposition from the within the transgender community to his gun control push.

Nicki Stallard, a long-time Second Amendment advocate from Fresno, spoke up against Newsom’s sweeping Safety For All voter referendum by saying, “If Gavin Newsom gets this passed, how will transgender women like me be able to protect ourselves?”

Stallard is a member of the Pink Pistols, an inclusive gun rights group founded in 2000 with chapters in 33 states and three countries. Allied with a number of other organizations in the Coalition for Civil Liberties, a group formed to oppose Newsom’s ballot initiative and includes partners as diverse as Jews Can Shoot and the Law Enforcement Alliance of America, Stallard’s message was used online by the campaign.

This drew condemnation from the lieutenant governor Friday, who paints himself as a champion for equality, on his official Facebook page.

The post was not received well, drawing nearly 300 comments, mostly negative and repeatedly calling Newsom transphobic and ill-advised, as well as over 90 “angry” button dislikes, leading to coverage of the online gaffe by the San Diego Gay and Lesbian News.

The Coalition for Civil Liberties was quick to fire back, classifying Newsom’s remark as shocking.

“Newsom’s condescending tone to Nicki has rightfully angered many people,” noted the group in a statement. “He also questioned her motives for wanting to defend herself. The LGBT community needs representatives and policies that help them deal with the very real dangers they face every day. The last thing they need is to have politicians attacking their desire to protect themselves against the threats they face.”

As for the Pink Pistols, they argue Newsom missed the mark altogether.

“What Gavin Newsom said about Nicki is not only laughable, it is ignorant and insulting,” Pink Pistols first speaker Gwen Patton told Guns.com on Monday. “Nicki Stallard has been one of the Pink Pistols’ strongest voices in California for many years. Since the accident that reduced my ability to travel, she has been my eyes, ears, and voice at public gatherings and conventions, to let people know that there are LGBT people who support the Second Amendment and lawfully carry firearms for self-defense.”

Patton explained that, while the Pink Pistols have worked with the NRA, it is not an offshoot or affiliate, and that information has been readily available on their website for a decade and a half. The non-partisan group comprises people from all political stripes, all socio-economic groups, all races, colors, and creeds, and all sexual orientations.

“Nobody is ‘using’ the trans community to do anything, least of all the NRA,” she said.

Further, Patton holds that their organization is needed to help advocate for self-defense against bias-motivated crime in the country.

“Transgender people in particular have been attacked, beaten, stabbed, maimed, set on fire, and shot in the back of the head execution-style, simply for being transgender,” she said.

As such, she is asking Newsom to do the right thing in the case of Nicki Stallard.

“I respectfully suggest that Gavin Newsom download and read the Pink Pistols Utility Manual from our website, and would very much appreciate it if he would issue an apology to Nicki Stallard and the rest of the Pink Pistols for his ignorant and unfounded statements,” Patton said.