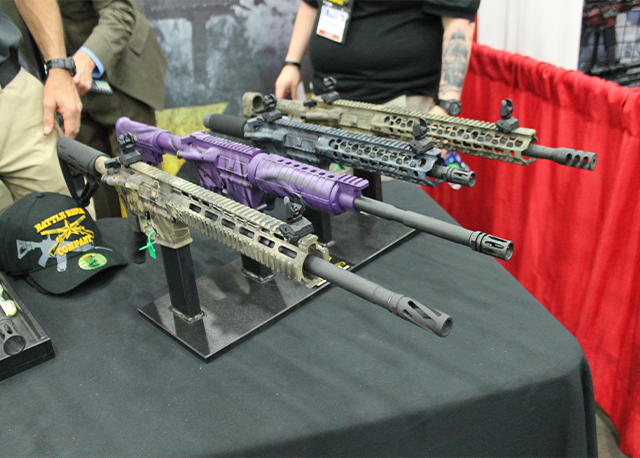 Having topped 80,000 attendees this weekend, the NRA Annual Meeting is a perfect opportunity for many small, family-owned businesses to get exposure and find their niche within the gun industry.

Battle Rifle Company recently released a newer version of its Trident model BR4 named Cutlass. Chris Kurzadkowski, owner of Battle Rifle Company, was brimming with excitement over the array of rifles on his table. He excitedly laid out how the Cutlass’ anti-corrosion coating made it an “innovative” design in a sea of ordinary ARs.

Designed with maritime security operations in mind, the 5.56mm Cutlass builds upon the BR4 platform, with the addition of NP3-coated components to reduce corrosion of metal from water exposure.

“We took it down to the Galveston Bay and threw it in the water for 30 days,” he told Guns.com at the NRA convention, “After 30 days, we brought it up and immediately fired 500 rounds through it. No problems.”

The Galveston Bay, located on the Texas Gulf Coast, is a mixture of fresh and seawater. Pollution is an issue plaguing the area, with the Galveston Bay ranking in the top four highest levels of toxic chemicals in the state.

Battle Rifle Company said the rifle was not completely immune to the water’s harsh environment. The rifle did suffer some rot on the barrel as a result of the toxic mix of pollutants and sea water but ultimately the Cutlass performed well after submersion.

“If a mermaid needed some firepower, this would be the gun,” Kurzadkowski said.

The Cutlass is available through Battle Rifle Company and retails for $1,595. 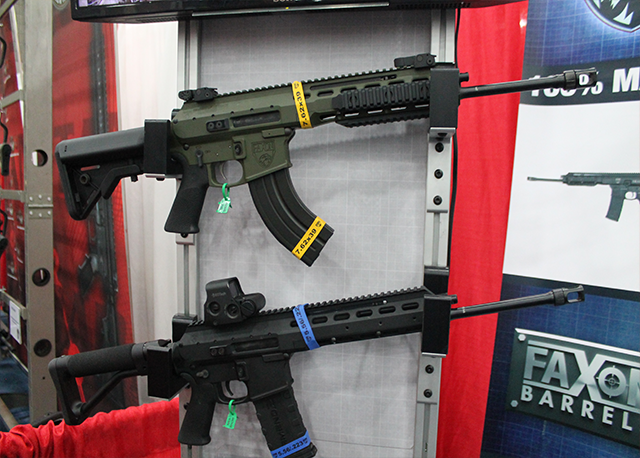 Another small but friendly firearm company sat just a few rows over from Battle Rifle’s booth. Faxon arms had a steady flow of visitors interested in their barrels, muzzle brakes, and their ARAK-21. The ARAK-21 is a complete upper assembly designed to pair with the AR-15.

Barrel, gas block, muzzle brake, gas piston, gas adjuster and barrel trunnion comprise the barrel assembly unit (BAU) with the gas adjuster knob the only part that is removable. Four gas flow settings allow for some fine-tuning. Consumers can pick their poison – either 5.56  or 300BLK – and the BAUs are interchangeable.

The upper itself is comprised of a charging block, standard charging handle, Picatinny rails, bolt carrier assembly and dual recoil spring system. The ARAK-21 also allows for the addition of a folding stock.

While the company specializes in uppers, Faxon does sell its ARAK in a complete rifle form. MSRP is $1,899 for the full deal. If the upper is all you’re after, price tag is $1,199.

Faxon Firearms’ booth at the NRA Meeting was hardly ever empty, with a steady flow of interested consumers checking out the small business. Josh Sykes, PR representative for Faxon, said that business has been good. “Sales have exploded,” he told Guns.com in Louisville.

Bob Faxon, owner of the company, mirrored that sentiment saying that AR consumers are catching on to the ARAK platform and loving it.