A recently released documentary on gun control in America and the NRA’s influence on it received some criticism Wednesday for the way it was edited.

“Under the Gun” director Stephanie Soechtig told the Washington Post a scene which gave the impression the Virginia Citizens Defense League didn’t know how to answer a question posed by the film’s narrator and executive producer Katie Couric was simply a pause for reflection.

“There are a wide range of views expressed in the film. My intention was to provide a pause for the viewer to have a moment to consider this important question before presenting the facts on Americans’ opinions on background checks,” Soechtig said.

After Soechtig apologized, Couric said she stands behind the director’s statement.

The film shows Couric sitting in a room with several members of the group and asking them questions pertaining to gun control.

“Let me ask you another question: If there are no background checks for gun purchasers, how do you prevent felons or terrorists from purchasing a gun?”

The group is silent for several seconds, seemingly unable to answer Couric’s question, as if to say that background checks on gun purchase are the answer to gun violence.

In reality, what happened after Couric asked the question was a healthy back-and-forth between her and the members of the gun rights group, according to audio provided to the Washington Free Beacon, who called the editing of the scene “deceptive.”

The gun rights group featured in the film agreed.

“Katie Couric asked a key question during an interview of some members of our organization,” said Philip Van Cleave, the group’s president. “She then intentionally removed their answers and spliced in nine seconds of some prior video of our members sitting quietly and not responding. Viewers are left with the misunderstanding that the members had no answer to her question.”

In fact, the group had much to say, one of them going into detail about prior restraint and how it’s illegal to assume someone is a criminal when they’re attempting to purchase a gun.

“The fact is we do have statutes, both at the federal and the state level that prohibit classes of people from being in possession of firearms,” said one person. “If you’re under 18, then in Virginia you can’t walk around with a gun. If you’re an illegal immigrant, if you’re a convicted felon, if you’ve been adjudicated insane — these things are already illegal, so what we’re really asking about is a question about prior restraint. How can we prevent future crime by identifying bad guys before they do anything bad and the simple answer is you can’t.”

Another member of the group offered his take on felons with guns, saying if they’ve served their time they should be allowed to buy a gun. 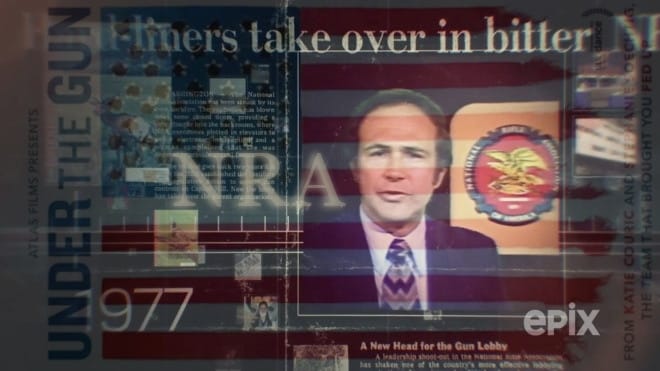 Katie Couric’s “Under the Gun” documentary takes aim at the NRA, who in 1977 was taken control by a small group of radical members. (Image: Jared Morgan via Epix/Atlas Films)

Gun control group Everytown for Gun Safety was prominently featured in the film. The group has been holding the documentary up as a piece speaking to the very work it does to try to prevent gun violence. The group and its affiliate, Moms Demand Action for Gun Sense in America, held a screening and panel discussion only miles from where the NRA convened its annual convention and endorsed presumptive Republican presidential nominee Donald Trump in Louisville last weekend.

Trump clenched the nomination Thursday, having received more than the required 1,237 delegates needed to win the Republican party nod.

When asked how the controversy surrounding the film’s editing will affect the group’s message, Guns.com was told on Thursday that it’s not Everytown’s place to comment on the actual production of the film.

The gun control documentary has been widely criticized for being biased and not accurately portraying the pro-gun argument. Though members of the Virginia Citizens Defense League and Open Carry Texas were featured, the two weren’t allowed to present a strong pro-gun case throughout the documentary.

Reason TV took a shot at Couric with a video edited to make fun of her journalism ethics and video editing skills, though it’s unknown if Couric even had a hand in the overall production of the documentary or the controversial scene she’s receiving criticism over.