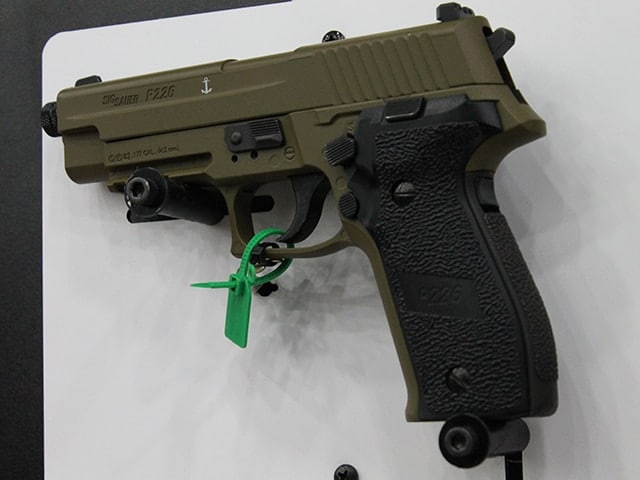 The P226 airsoft pistol, in olive drab, looks and feels exactly like the real P226 model. (Photo by: Jacki Billings)

Consumers now have a new way to shoot and train with a line of Sig Sauer airguns designed to look and feel like the real deal.

The line of airguns, launched late last fall, features versions of Sig’s popular MCX, MPX, P226 and P250. Unlike other airguns on the market that simply mimic a certain look, Sig’s line of airsoft guns are exact replicas of the company’s live fire guns.

“The air guns have the same trigger pull and the same weight,” Shannon Jackson, PR rep for the company, told Guns.com at the NRA Annual Meeting in Louisville. “Perfect for beginners or people that can’t get to the range often.”

More firearm instructors are turning to these non-lethal options as tools in the classroom. Force-on-force and close quarters combat trainers routinely use air soft to help students achieve realistic self-defense scenarios. Airsoft pairs well with newer and younger shooters and helps circumvent the intimidation often associated with firing a real weapon for the first time.

While eye protection is a must while shooting airsoft (“You’ll shoot your eye out,” as Christmas Story taught us) it doesn’t carry the same dangers as live guns. The small plastic BBs used as ammo rarely break skin making them ideal for those wishing to expand their training arsenal with a little force-on-force.

Sig’s systems are CO2 powered which builds on the realistic platform with the addition of recoil to the package. The rifles fire at up to 750 fps, while the pistols manage around the 500 fps mark. A 30 round magazine accompanies the rifles and the pistols are equipped with a 16 round mag.

MCX, MPX and P226 are available in black or flat dark earth, with the P250 optioned in black or olive drab.  Sig also offers additional accessories for the rifles, such as scopes and red dots.

Prices start at $79.95 for the pistols and $249 for the rifles. The newer line, which features the flat dark earth color, is set to hit retailers in early summer.