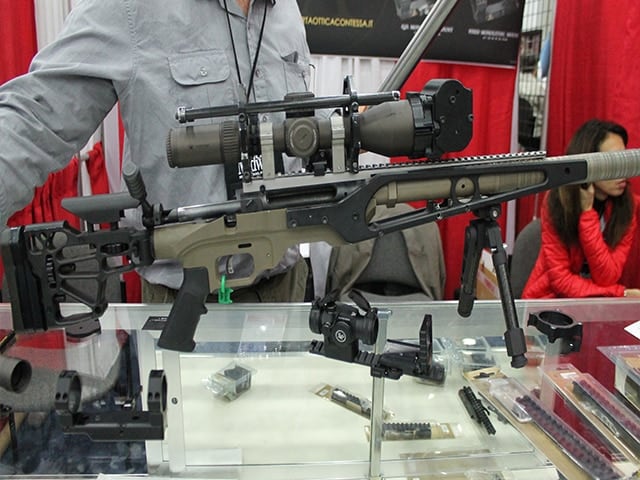 TacomHQ was on hand on at the NRA Annual Meeting in Louisville to show off its new long range shooting accessories — TARAC sighting accessories, Armor Optic and Structured Barrel, which are boosting the small company’s visibility in the industry.

The first in TacomHQ’s lineup of accessories is the TARAC, or target acquisition, compact mirror assembly. This lens mounts on an existing device, such as a red dot, scope, ACOG or iron sights, and shifts the target image allowing for additional zeroes.

John Baker, owner of TacomHQ, told Guns.com that the strength of the TARAC device comes from its versatility as a secondary option. “One of the great things about the device is that is totally separate of the primary optic: lose it, break it just keep on shooting,” he said.

The smallest size in the TARAC arsenal is the Alpha. A flip-up single lens gives rifles users a secondary zero for long range engagement. For example, if a shooter had been engaging at 100 meters but needed to quickly fire at a target at 500 meters, the Alpha quickly flips up and allows the shooter to engage without needing to re-zero. Price on this unit starts at $350, with $150 for each lens after that. Custom units will be calibrated to consumers’ desired MIL/MOA shift.

The Bravo is the middle-man in the series and is the most interchangeable. A multi-zero kit, the Bravo gives operators the ability to swap zeroes quickly. Attached magnetically, the Bravo snaps on the front end of any scope and based on the orientation can add or subtract MIL/MOA. Maximum shift is 30 MILs. The TARAC can be paired with a quick-release base for easier swapping. The Bravo is set at $550 and includes the scope adapter and one lens. Additional lenses are $175 each.

The last version in the line is known as the Charlie and gives shooters the greatest range out of all the TARAC models. Attaching to the front end of a scope or Picatinny rail, the Charlie uses a calibrated system of mirrors. These mirrors shift target images to a specific MIL/ MOA value. Maximum range is three miles with the Charlie attachment. The Charlie retails for $1200 and includes the scope adapter, lens assembly and one main plate in a choice of 20, 30 or 40 MIL. Additional custom plates are $125 each.

Baker said the biggest complaint he hears is that TARAC system overcomplicates a simple running of the turret. Baker insists this is not the case saying that his product streamlines adjustments while maintaining accuracy. “Shoot the reticle to the maximum range — add a lens — shoot the reticle again. Nothing is faster,” he said

Several military organizations are testing the TARAC for potential use in combat. Some of these include the U.S. Army, Marine Special Forces and Navy SEALS. Components are set to leave TacomHQ this week for further testing.

TARAC prices are currently based on custom requests. Baker told Guns.com in an email that the company has sold the Alpha and Bravo models to a larger company who will begin selling them commercially at a lower price point. No word on when these will be available or who acquired the rights.