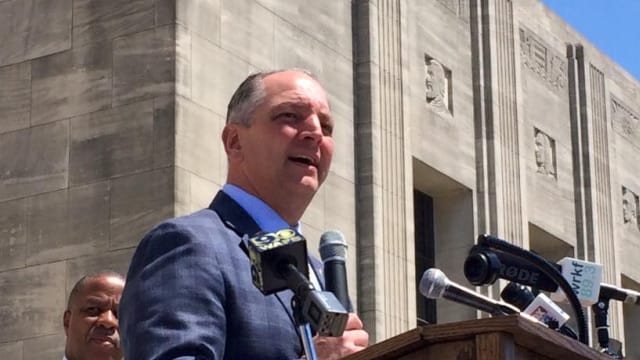 The legislation, criticized by members of the Black Lives Matter movement, was introduced in the state House in April and passed that body by a 92-12 vote before winning approval of the Senate earlier this month 33-2. Edwards signed the measure Thursday in a ceremony in Baton Rouge.

“Coming from a family of law enforcement officers, I have great respect for the work that they do and the risks they take to ensure our safety,” said Edwards in a statement. “The men and women who put their lives on the line every day, often under very dangerous circumstances are true heroes and they deserve every protection that we can give them. They serve and protect our communities and our families. The overarching message is that hate crimes will not be tolerated in Louisiana.”

The new law, which passed the legislature as HB 953, adds police, firefighters and emergency medical personnel to the already existing categories of perceived age, color, creed, disability, gender, race, sexual orientation and national origin protected under hate crime statutes in the state. Individuals convicted of a hate crime in Louisiana can see five additional years tacked on to their sentence. Misdemeanor hate crime offenders can be sentenced to prison for up to six months and given a $500 penalty.

Under the language of the act, the definition of law enforcement includes both active and retired police, sheriffs, peace officers, corrections, parole and conservation officers.

The move was supported by law enforcement lobby groups and the state police.

“The signing of this bill gives us all an opportunity to pause and remember the extraordinary acts by seemingly ordinary people who serve our state as first responders,” said Colonel Mike Edmonson, State Police superintendent. “Whereas citizens flee danger, police, fire and EMS personnel run to it.”

The New Orleans Chapter of Black Youth Project 100, associated with the Black Lives Matter movement, and others, opposed the passage of HB 953, arguing the numbers of people killed by what the group terms “police violence” far outpaces the number of law enforcement officers killed.

“The criminal (in)justice system and those who uphold it have a long and egregious history of inflicting violence on Black and Brown bodies while hiding behind uniforms and badges,” reads a statement from BYP100. “The ‘Blue Lives Matter’ bill is an insidious attempt to destabilize our First Amendment rights as community members who hold the police, and others sworn by oath to serve and protect, accountable.”

The measure took effect at signing.