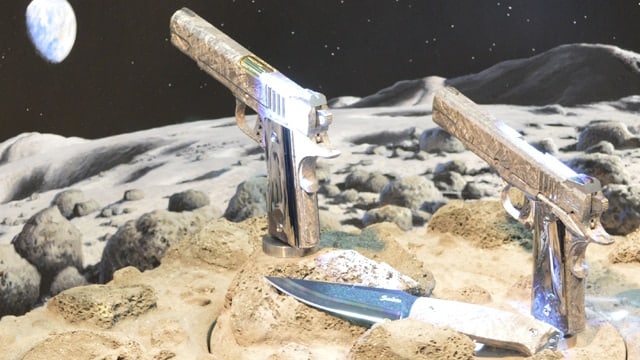 The company had been teasing the project since late last year and promised completion by the National Rifle Association’s annual convention, which was held last weekend in Louisville.

“Craftsman and meteorite collectors have long-prized the Gibeon meteorite for the beauty of its Widmanstatten crystalline pattern,” said Rob Bianchin, Cabot’s founder and president in a statement. “Luxury goods companies have used it to make watch faces, jewelry and other artistic objects. This is the first time anyone’s ever made a functioning mechanical device out of the material.”

The company was quick to point out the challenges of working with a meteorite. “No small feat from a metallurgy standpoint. The material lacks perfect uniformity, not to mention the hundreds of tiny extra-terrestrial inclusions blasted into the Gibeon meteorite’s interior during its journey to Earth.”

Cabot said the guns feature a Widmanstatten pattern, which is a reference to the various states that can be drawn from this rarest of material. A Widmanstatten was developed by the very slow cooling of the planetesimal core at a rate of a few degrees per million years.

“Drawing out the Widmanstatten from the material through acid etching is an art itself,” said Michael Hebor, Cabot chief operating officer and lead engineer. “It has a will of it’s own.”

The result is an aesthetic tour-de-force — from the prized Widmanstetten pattern adorning both major and minor surfaces to the high-polish grips and judicious use of the meteor’s “bark” on the trigger face and grips. And yes, the guns work.

“We test-fired both guns at our Indiana facility,” Bianchin reveals. “It was even more nerve-racking than the first time we cut through the meteor. But they shot.  Everything worked exactly as it should.”

What is price for perfection? “We’re listing them at $4.5 million, which is the current record for the most expensive firearms ever sold.  Worth every penny,” Bianchin said.