Maryland police search for suspects in armed robbery of GameStop 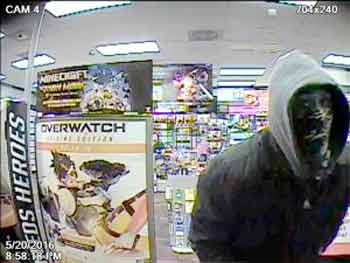 Surveillance video from an armed robbery at a GameStop in Silver Spring, Maryland, last week was released Wednesday by authorities in hopes of capturing the suspects responsible.

The incident occurred on May 20, just before 9 p.m. The two suspects can be seen entering the store, both wearing dark-colored hoodies and gloves, with their faces covered and carrying handguns. According to a press release from the Montgomery County Department of Police, three customers – a mother and father with a 7-year-old boy – and two employees were in the store at the time of the robbery.

One of the suspects ordered the customers to stand against a wall near the checkout counter, but one of the robbers got an unexpected surprise when he pushed the little boy and the little boy pushed back. The boy’s father said he, his son and his wife were all three separated in the store when the robbery occurred and he wasn’t aware of his son’s actions until after the ordeal was already over.

The boy’s father told a local Fox affiliate that they did not understand what he was thinking until after they saw the video.

“Of course, we think our son is brave and a strong kid,” he said. “But we didn’t exactly know why, and when we saw the tape, we saw why. Because he saw somebody who was a stranger, who seemed most dangerous to him and he tried to defend himself. I think it was his natural instinct taking over there.”

After corralling the customers, the suspects went after the employees. One was forced to the ground, while the second began emptying the cash register. Both were held at gunpoint. 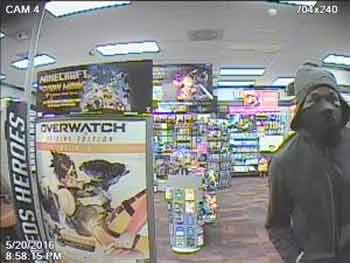 Once they cleared out the cash register of an undisclosed amount of cash and taking personal property from the victims, the two suspects ran out of the front door and fled the scene.

Surveillance video captured images of the two suspects, which Detectives from the Montgomery County Police Department, Major Crimes Division hope will help to identify and ultimately apprehend them. Both suspects are black males believed to be in their 20s, with a similar build, standing about 5’6” tall and weighing approximately 170 pounds.