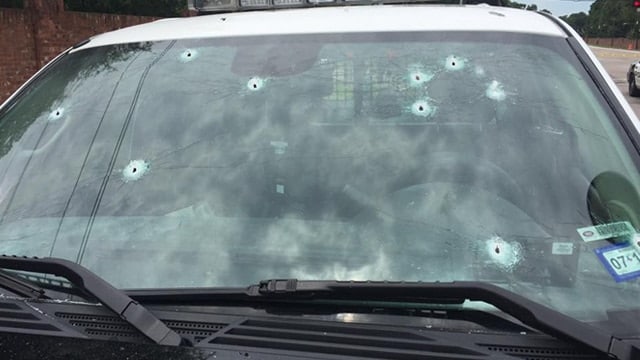 The primary responding officer survived unscathed after his patrol car was shot 21 times in Houston on May 29, 2016. (Photo: Houston Police/Facebook)

Two men are dead and several injured after a gunman opened fire with a “high powered weapon” in Houston on Sunday.

Authorities are still unclear why Dionisio Garza III, 25, opened fire in an area on Houston’s Memorial Drive, but the attack appeared random and unprovoked, said John Cannon, a spokesman with the Houston Police Department.

Witnesses said the shooting started around 10 a.m. when Garza pulled into an auto detail shop and shot a man who was stepping out of his car.

The victim, Eugene Linscomb, died from his injuries. Four others were also shot, but their injuries were not considered to be life-threatening.

The first officer on the scene was also met by gunfire. Although the patrol car was riddled with nearly two dozen bullets, the officer was not injured.

Additional officers arrived on the scene and SWAT was called in shortly thereafter. A police helicopter hovering above was also struck at least five times by gunfire, but no one inside was injured.

Two officers shot during the exchange of gunfire between Garza and law enforcement. One was struck in the hand and the other was hit in the chest but a bullet-proof vest absorbed the impact. They were both treated for their injuries and released Sunday.

About an hour after officers responded to the first call, the suspect was fatally shot by an HPD SWAT officer.

A second man, who was armed with a gun and originally believed to be involved in the shooting spree, was also injured and transported to the hospital. The man, Byron Wilson, was determined to actually be a good Samaritan attempting to stop the gunman, authorities told a local ABC affiliate reported. He had a permit to carry a concealed gun.

A source close to the investigation told local media that Garza is from San Bernardino County and was discharged from the U.S. Army in 2014. He served two tours in Afghanistan and doesn’t appear to have a criminal history.

The incident is still under investigation.