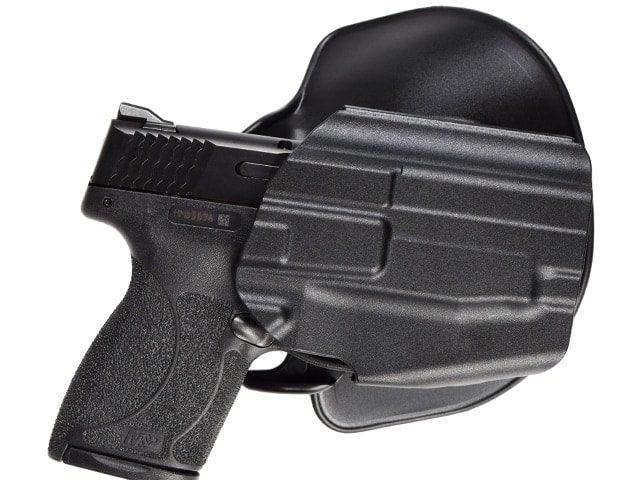 Safariland Group revealed plans to expand on its line of concealable holsters with the addition of models geared towards the new Smith & Wesson M&P .45 ACP.

Scott Carnahan, Vice President of Equipment, said both Bianchi and Safariland will now offer over 15 styles of concealable holsters for consumers.

“With the launch of the Smith & Wesson M&P Shield .45, we are excited to debut fits in several of our most popular holsters across the Safariland and Bianchi brands,” Carnahan said in a statement.

Best known for molded, kydex holsters Safariland will be providing 10 models of holsters to include inside-the-waistband, belted and paddle holsters. Six out of 10 of these holsters come in plain black, while the GLS versions will give consumers a choice between black or flat dark earth. Prices range from $47 to $55 depending on the model.

Bianchi will keep to their legend of leather with six styles of holsters for the Shield. These holsters include their Remedy, Venom, Professional, Professional Tuckable, Allusion Assent and Suppression IWB. Princes range from $56 to $78.

Smith & Wesson announced the new M&P Shield chambered in .45 ACP at the NRA Annual Meeting in Louisville earlier this month.

“We unveiled the original M&P Shield four years ago at the NRA meeting in St. Louis and here we are four years later unveiling the M&P45 Shield in Louisville,” Jan Mladek, general manager of the M&P line, told Guns.com at the NRA Meeting.

Building upon the popular M&P line, the new Shield ups the caliber while maintaining the design Smith & Wesson fans love.

The Shield in .45 ACP features a 6+1 capacity with flush magazine or 7+1 with the extended mag. Under 1-inch thick and measuring just under 7-inches in length, the pistol aims to maintain the easy conceivability associated with the M&P Shield name.

The M&P Shield in .45 ACP  is set to ship early this summer.