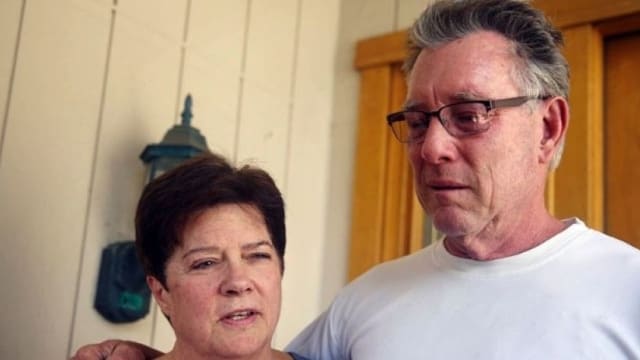 Liz Sullivan, left, and Jim Steinle, right, parents of Kathryn “Kate” Steinle, have filed suit against the federal agencies, the city of San Francisco, former Sheriff Mirkarimi and the shooter in the murder of their daughter. (Photo: Lea Suzuki/San Francisco Chronicle via AP)

Last July’s high profile murder of Kathryn Steinle as she was walking along San Francisco’s iconic Pier 14 with a gun stolen from a federal agent has wound up in court.

The U.S. Bureau of Land Management confirmed the .40-caliber Sig Sauer P-239 recovered at the scene was the duty pistol of a Ranger stolen from his vehicle, though they have declined to name the officer involved.

Steinle’s alleged killer, Juan Francisco Lopez-Sanchez, 46, a Mexican national with at least seven felonies and five deportations under his belt, pleaded not guilty in San Francisco Superior Court last year and maintains he found the gun in a T-shirt on a bench. This was just weeks after he was briefly in custody of the San Francisco sheriff’s office but released despite a request to detain him further by  U.S. Immigration and Customs Enforcement due to a memo issued by Sheriff Ross Mirkarimi to generally refuse requests from the agency.

The 26-page suit, filed last Thursday by the slain woman’s mother and father in U.S. District Court for the Northern District of California, claims general and public entity negligence in the wrongful death of Steinle, naming the BLM, ICE, the City and County of San Francisco, Mirkarimi and Steinle’s alleged murderer himself as defendants.

The filing argues the tragedy was the by-product of a combination of abuse of authority by Mirkarimi, failure to act by ICE officials, and failure by BLM to properly secure the gun used by a repeat drug felon to kill an innocent woman.

“Kate’s fate was sealed when a U.S. Department of Interior, Bureau of Land Management Ranger failed to properly secure and/or store a government-issued firearm while it was left in an unoccupied vehicle in a high-auto theft neighborhood in the City and County of San Francisco,” reads court documents. “Due to this failure, Lopez-Sanchez was able to gain access to the firearm, which he then used to shoot Kate.”

Citing BLM’s own guidelines that firearms not in use be secured “out of sight, under lock and key” and unloaded, the suit takes exception with the fact that the Ranger left his pistol loaded and unlocked in an unattended vehicle inside a backpack in plain sight of passersby. It was stolen just five days before the shooting and has since been ballistically linked to the crime.

“We believe that what happened here is merely a symptom of a much wider problem of law enforcement agencies failing to account for the weapons that are issued to their personnel,” said family attorney Frank Pitre to The San Francisco Mercury News. “We have learned of instances where law enforcement personnel have lost weapons, or had their weapons stolen, and they merely go out and buy a replacement weapon. So they never report that their gun has been lost or stolen.”

Since Steinle’s death, San Francisco’s Board of Supervisors unanimously approved a new ordinance that would require anyone in the city who leave a gun in a vehicle to secure it first.  Ironically, though the ordinance started as a measure specifically for police; city and county peace officers are exempted from the proposal as long as their agency has a policy regulating the storage of guns both on and off duty.

Likewise, the law does not cover officers from outside jurisdictions and federal agencies, such as the gun stolen from the BLM ranger in the Steinle murder and the Glock stolen from an ICE agent and used in the killing of an Oakland muralist since then.

California State Sen. Jerry Hill, D-San Mateo, has proposed a bill to remove current protections under state law that allows peace officers — including federal law enforcement officers, officers from other states in California on business and retired peace officers who are authorized to carry firearms — from the same regulations that require guns to be secured in vehicles when not in use. It passed the Senate 25-13 in April and is currently undergoing committee hearings in the Assembly.

As for the lawsuit, City officials feel the case made by Steinle’s survivors is weak.

“In a civil lawsuit like this one, the issue is whether the government and its taxpayers can be held liable for the actions of a criminal,” said Matt Dorsey, representative for the San Francisco city attorney’s office. “And under well-established case law, they cannot. The law doesn’t allow claims against government entities and officials based on criminal conduct by third parties.”

Neither ICE nor BLM respond to Guns.com’s request for comment and Mirkarimi has been out of office since last November.

Meanwhile, the Associated Press reports a vehicle operated by an agent of the Federal Bureau of Investigation was broken into in San Francisco’s popular Alamo Square on Sunday that resulted in the agent’s .40-caliber Glock handgun being stolen, along with his badge and credentials.