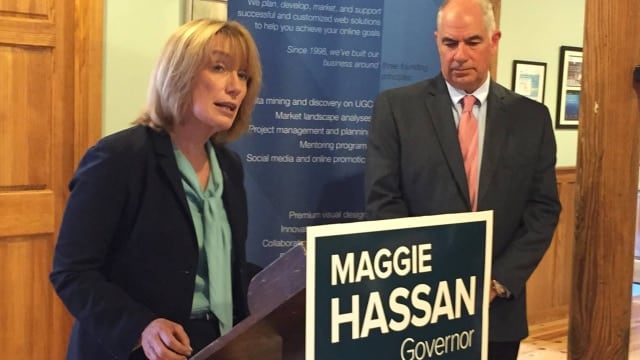 For the second time in as many years, Gov. Maggie Hassan rejected a bill that would have made the Granite State the 11th to codify the right to concealed carry without a permit.

Last fall, the staunch anti-gun Democrat vetoed a measure placed on her desk changing state law to make obtaining a concealed carry permit optional. A new proposal this session passed the House with a 206-146 vote earlier this year and the Senate 14-10 this month.

However, Hassan, running as the challenger in a tight race for Republican U.S. Sen. Kelly Ayotte’s seat with the strong backing of gun control groups, had not changed her mind on the subject.

“As I said when I vetoed nearly identical legislation last year, New Hampshire’s current concealed carry permitting law has worked well for nearly a century – safeguarding the Second Amendment rights of our citizens while helping to keep the Granite State one of the safest states in the nation,” Hassan wrote in her veto statement to lawmakers Friday.

Hassan went on to explain her endorsement of gun rights, with limits applied, and cited a landmark Supreme Court case and recently passed conservative jurist in her reasoning to scuttle the measure.

“I also continue to support the Second Amendment and the right of Americans to responsibly own guns for personal safety, hunting, and recreation, but as the late Justice Antonin Scalia reaffirmed in the 2008 Supreme Court case of District of Columbia v. Heller, states also have the ability to responsibly and appropriately regulate the concealed carry of firearms,” wrote the Governor.

The vetoed measure, HB 582, would have retained the state’s current concealed carry permit system that has been in place since 1923 while making it optional if the carrier is an adult legally able to possess a firearm. Open carry of a loaded gun as well as concealed carry of an unloaded one without a permit is already the law of the land and two of New Hampshire’s neighbors, Vermont and Maine, both have permitless concealed carry laws while enjoying low crime rates.

Lawmakers condemned Hassan’s move, but have fewer than the two-thirds majority support of the legislature to override her veto.

“The Governor has vetoed yet again another piece of common sense legislation that allows people to protect their lives, liberties and loved ones by exercising their Second Amendment rights under the Constitution,” said Senate Majority Leader Jeb Bradley, R-Wolfeboro, as reported by the Union Leader.

“In New Hampshire people can openly carry any firearm, but Gov. Hassan believes law-abiding citizens should be required to obtain a special permit to carry a legal weapon on a concealed basis,” he said.

“Once again, Governor Hassan has shown herself to be a true champion of gun violence prevention by vetoing this reckless legislation,” said Deidre Reynolds with the New Hampshire chapter of Moms Demand Action, in a statement emailed to Guns.com.

“Under current state law, concealed carry permit holders must pass a background check before carrying hidden, loaded weapons in public. House Bill 582 would have gutted that system and repealed core public safety standards in the Granite State,” she said.

State Second Amendment groups such as the New Hampshire Firearms Coalition and the National Rifle Association backed the reform.