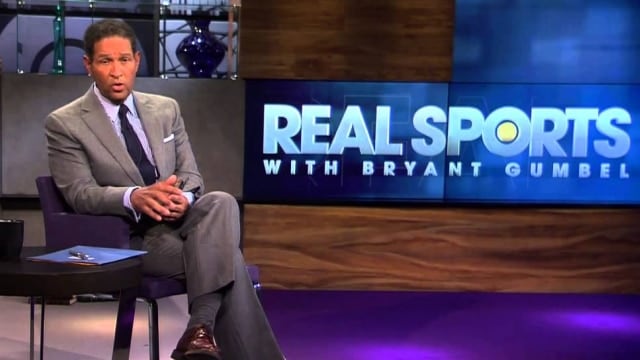 HBO’s Real Sports with Bryant Gumbel spent 20 minutes in its latest episode on the subject of the AR-15, and not all are pleased in how they were portrayed. (Photo: Screenshot)

Back in the 1960s, Jim Sullivan was key in the development of the AR-15 and is debating how HBO edited his comments this week on the iconic gun’s design.

Leroy James “Jim” Sullivan is a legendary firearms designer who was on the ArmaLite team that created, among others, the AR-7 and AR-15 rifles, then went on to work at Stoner on the Model 63, Ruger on the Mini-14 and M77, and Singapore’s Chartered Industries on the Ultimax 100 light machine gun. In all, he holds more than 200 patents on everything from squirt guns for kids to magazines and recent modifications to the M4 series rifle.

While Sullivan has never been shy about speaking of his work as an engineer, to include his part in the design history of “America’s Rifle” – the AR-15, it is a recent conversation aired on Real Sports, produced by HBO and hosted by Bryant Gumbel, that has the inventor seeing red.

“The anti-gun HBO Sports interview misrepresented much of what I had said,” wrote Sullivan in The Federalist.com this week. “They were apparently trying to make the AR-15 civilian model seem too dangerous for civilian sales. They didn’t lie about what I said, they just omitted key parts, which changed the meaning.”

In the aired piece, Sullivan spoke with HBO’s correspondent, David Scott, and had the following exchange:

Scott: “The lethality of the AR-15, is – is that reduced in the civilian semi-automatic mode?”
Sullivan: “No.”
Scott: “It’s not?”
Sullivan: “Same effectiveness. I mean – in fact, the – the gun is functioning exactly the way – the military model is – in semi-automatic.”

To this, Sullivan wrote:

The examples I most object to are: 1) When I appear to say that the civilian-model AR-15 is just as effective or deadly as the military M16, they omitted that I had said “When firing semi-auto only” and that “the select fire M16 on full auto is of course more effective”; and 2) the interviewer pretended not to understand the relevance that, due to the Hague Convention, military bullets cannot be expanding hollow points like hunting bullets that give up all of their energy in the target body instead of passing through with minimum wound effect, with most of the energy still in the bullet and wasted.

The gun designer explained the primary focus on using the 5.56mm round in the rifle was in conserving space for the average foot soldier, saying that with a cartridge that weighed half as much as the one it was replacing, a soldier could carry twice the ammo.

Sullivan goes to point out that with the reduction in size, came a reduction in utility, writing, “Their lethality is based entirely on how powerful they are. 5.56 is only half as powerful as the 7.62 NATO (.308) hunting bullet. That doesn’t mean I’m not pleased to see AR-15s sell on the civilian market. It just means I didn’t realize they would 57 years ago.”

It was not just Sullivan who had a turn in the barrel with HBO in the 20-minute piece.

Larry Keane with the National Shooting Sports Foundation went on record defending modern sporting rifles at length to HBO’s somewhat hostile interviewer on the subject of public safety and the use of the term “assault rifles” as applied in the arena of gun politics.

The debate on the civilian applications and popularity of the AR-15 series rifles – after more than a half-century of open sales which included nearly 30 years of legal select-fire production before the 1986 Hughes Amendment – comes at a time when attorneys for a group of Newtown shooting victim survivors are painting AR maker Bushmaster and its parent company, Remington, as producing military-style weapons marketed at civilians.

It should be noted that barring a few high-profile incidents such as the Sandy Hook shooting, few murders are committed with rifles nationwide.

As highlighted by the Federal Bureau of Investigation’s crime statistics, firearm homicides in the country declined from 2010-2014 and noted a very small portion of these were accomplished with rifles. For example, of the 11,961 homicides in 2014, the most recent that statistics are available, just 248 – about two percent – were classified as being performed with a rifle.

For its part, HBO Sports stands by its production and told Guns.com the comments made by Sullivan in the segment shown were in line with those he had made in phone conversations with producers in the weeks prior to the on-camera interview.

“Real Sports fairly and accurately represented Mr. Sullivan’s interview in our report,” HBO Spokesman Ray Stallone told Guns.com. “Mr. Sullivan says that we ‘omitted key parts’ of his comments on the lethality of the civilian AR-15 as compared to that of the fully-automatic military version. That claim is untrue.”

HBO provided Guns.com with the below, unedited exchange between Scott and Sullivan on the subject, picked up as Mr. Sullivan was explaining his goals in helping design the original AR-15. None of the dialogue was included in the show’s on-air report:

Sullivan: “You – you want the explosive – effect that was – that’s achievable with high-velocity – unstable bullets.”
Scott: “That’s exactly what the AR-15 delivers?”
Sullivan: “That’s exactly what the AR-15 shoots.”
Scott: “So that was – that was an advance?”
Sullivan: “Right.”
Scott: “And – and that gun became a success, and eventually, the standard? Explain how that…”
Sullivan: “Yeah. Well, I mean, the gun – was adopted as long – as well as the cartridge, the ammunition for it. I mean, they have to be – you know, work together.”
Scott: “Did you realize right away you had – you had a success on your hands?”
Sullivan: “Yes.”
Scott: “It was clear?”
Sullivan: “Oh, it was spectacularly clear.”
Scott: “Do you remember the moment that the group at ArmaLite…”
Sullivan: “Oh, they – I mean, we were surprised at the difference that you could get just by going down a, you know, less and less stable bullet.”
Scott: “Really?”
Sullivan: “And the reason that is important in military ammunition, military – the Hague Convention – prohibits the use of expanding projectiles, expanding bullets – hollow point bullets. Dumb, dumb bullets they’re called sometimes, okay? This was not a – the bullet didn’t expand at all. It just tumbled.
Scott: “So it was allowed under the NATO treaties.”
Sullivan: “Right.”
Scott: “But it did similar damage to the bullets…”
Sullivan: “Well, it g…”
Scott: “that were banned?”
Sullivan: “Yeah. Yeah. Right.”
Scott: “Yeah, interesting. So, there must have been a great sense of enthusiasm for the project when this became known.”
Sullivan: “That’s correct.”