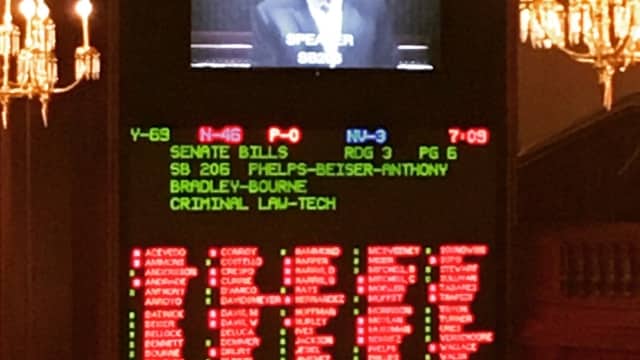 Lawmakers were able to push a measure lifting the ban on suppressors in The Land of Lincoln halfway through the legislature Tuesday night.

The National Firearm Act regulated sound moderating devices are legal for citizens to use in 42 states and a bipartisan group of legislators and advocates in Illinois have in recent years been progressively supporting adding the state to that list with past bills introduced in the House and Senate to do just that.

The latest push came in a House floor amendment from Rep. Brandon W. Phelps, D-Harrisburg, on Sunday that added language to a Senate bill to remove the prohibition on suppressors and silencers and allow for their use in hunting. It immediately picked up 18 co-sponsors and passed the House in a 69-46 vote on its third reading Tuesday night just before the end of session.

Phelps had backed similar legislation last session, arguing such a proposal would help mitigate hearing loss among hunters and shooters.

The measure that now faces a tough uphill battle in the Senate, SB 206, had already passed that body in April but now needs concurrence on the suppressor amendment. The bill in its current form would amend Illinois law on the use of a silencer/suppressor or other device to muffle or mute the sound of a report resulting from the firing of any gun. It would still require the device meet all federal regulations.

In the past, such a move had been blasted by gun control advocates as unneeded.

The bill requires a 2/3 vote to pass the Senate due to its mandate to take effect immediately upon signature by the governor.

In an interview with SilencerCo co-founder and CEO Josh Waldron in April, the suppressor advocate told Guns.com the governor is on-board.

“States that we’ve never thought possible like Illinois is gaining a lot of momentum and there’s a very high probability that Illinois will be another state here as well as Massachusetts,” said Waldron. “I’ve sat down with both of those governors in both of those states and they’ve promised to sign the bill if I can get it to their desks.”

The Senate, locked in a budget crisis, could hear the bill as early as next week should they meet.