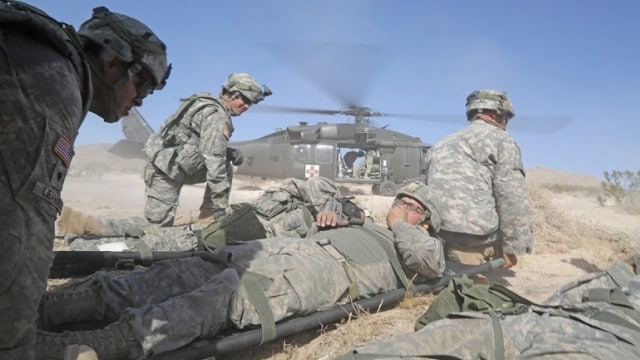 The XSTAT uses a series of fast-absorbing sponges to seal a wound in as little as 15 seconds and was used successfully by a forward surgical team. (Photo: U.S. Army, file)

A product billed as “fix-a-flat” for temporarily sealing cavities such as gunshot wounds recently helped stabilize a coalition forces soldier wounded in action.

The XSTAT-30 Rapid Hemostasis System, produced by Oregon-based RevMedX, was approved by the U.S. Food and Drug Administration six months ago for use in treating severe wounds and trauma. Capable of slowing bleeding in seconds, it can be left in place for up to four hours, allowing those with otherwise catastrophic bleeding time to be evacuated to an advanced medical facility.

As detailed in a release from the company this week, the device was used to help treat a gunshot wound in a soldier’s thigh when more traditional techniques used by a forward surgical team (FST) failed.

“Throughout the course of the roughly 7-hour surgery, multiple attempts at using bone wax and cautery on the bleeding sites were unsuccessful and the patient received multiple units of blood and plasma,” reads a statement from RevMedX. “Eventually, the FST team opted to use XSTAT and applied a single XSTAT device to the femoral cavity— resulting in nearly immediate hemostasis. The patient was stabilized and eventually transported to a definitive care facility.”

Andrew Barofsky, president and CEO of RevMedx, welcomed the news, saying, “The first-in-human experience with XSTAT is the culmination of tremendous effort on the part of both RevMedx and our military collaborators.”

More on the background of XSTAT below.