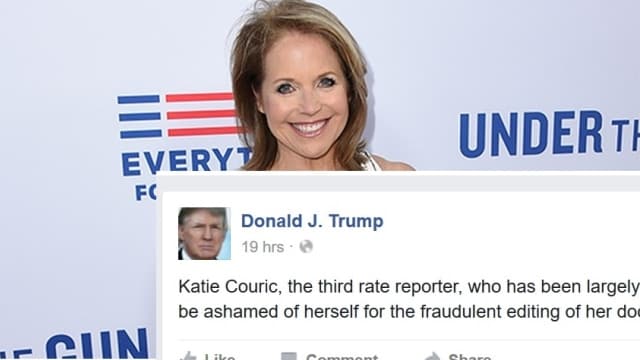 The presumptive Republican Presidential nominee and the Second Amendment group that endorses him are attacking Katie Couric over her polarizing documentary, “Under the Gun.”

Produced and starring Kate Couric and directed by Stephanie Soechtig, the film has been derided by gun rights advocates over its created editing and was pulled from its free showcase on EPIX Tuesday, which the network contends was planned. The move came less than a day after Couric issued a four-paragraph statement saying she regretted the misleading scene in general.

This is did not stop GOP front runner Donald Trump from voicing his opinion on Couric late Tuesday, who he called a “third rate reporter.”

Katie Couric, the third rate reporter, who has been largely forgotten, should be ashamed of herself for the fraudulent editing of her documentary.

The National Rifle Association meanwhile is joining at least two other petitions calling for Yahoo to fire Couric through a Thunderclap campaign set to hit social media on June 6.

“This is just another example of anti-gun propaganda being passed around as “news” by “journalists” who don’t believe in the Second Amendment, don’t like guns or the people who own them, and are in the pockets of politicians like ex-NYC Mayor Mike Bloomberg and Hillary Clinton,” reads the push, which is the number two trending event on the the platform.