Following a fatal shooting at a state college in California this week, President Barack Obama on Thursday – National Gun Violence Awareness Day – called for an end to what he’s called an American epidemic.

The president tweeted his message from the official POTUS Twitter account, without specific reference to the UCLA murder-suicide that occurred Wednesday morning, and used gun control group Everytown for Gun Safety’s #WearOrange hashtag, a campaign started by Chicago high schoolers in 2013 after the killing of a friend to raise awareness of gun violence.

We cannot accept our level of gun violence as the new normal. We must take action to prevent this from happening again & again. #WearOrange

It’s no coincidence the group adopted the color because of its significance in the gun world. The color has been used by hunters for years to make them stand out in an attempt to prevent accidental shootings. Is it a coincidence the National Rifle Association on Thursday published a short blog post offering three significant things about the color used by hunters? The gun lobby group declined to comment.

The Wear Orange campaign is meant to highlight the stories of the victims and families affected by gun violence, but the highly-politicized issue can’t be discussed without talking about the gun control bills being introduced in their names – laws which gun rights advocates say will do little to prevent the kind of violence that happened at UCLA on Wednesday.

.@DLoesch: “How many more laws do you need to prevent a situation like [#UCLA] from occurring?” https://t.co/9gd18zLMg3

What is coincidental is that National Gun Violence Awareness Day came this year just a day after a graduate student fatally shot his professor before turning the gun on himself in the engineering building on the University of California, Los Angeles campus.

But ask gun control groups and they’ll tell you a shooting was bound happen on their annual day of gun violence awareness.

Some 108,476 people in America are shot annually – 287 daily – in murders, assaults, suicides, attempted suicides, unintentional shootings or through police intervention, according to the Brady Campaign to Prevent Gun Violence. The group also found that of those, an average of 89 people die from gun violence daily. According to an Everytown analysis, there have been at least 186 school shootings – an average of nearly to one a week – since a gunman fatally shot 20 children and six adults at an elementary school in Newtown, Connecticut, on Dec. 14, 2012.

The color orange protects hunters and was adopted by advocates of gun violence prevention after the 2013 shooting of Hadiya Pendleton, a 15-year-old high school student from Chicago. Just a week after marching in Obama’s second inaugural parade, Pendleton was shot and killed.

Reality TV star Kim Kardashian showed her support by donning an orange shirt in a selfie she tweeted out Thursday, as did comedian and actress Amy Schumer, who took on gun control after a gunman opened fire at a Louisiana movie theater during a screening of her movie “Train Wreck” in July 2015. The actress later joined her cousin, Sen. Charles Schumer, in announcing legislation which would attempt to plug holes in the national background check system.

Everytown tweeted a photo of more notables in orange, including directors Spike Lee and Ron Howard, as well as actress Julianne Moore. Lee on Wednesday night participated in a ceremony where he flipped a switch to light New York City’s Empire State Building in a bright orange glow for gun violence awareness.

Me and my honeys on set like to #wearorange thinking of you today and everyday Mayci and Jillian pic.twitter.com/WGClVCUvAq

Some familiar faces are taking part in #WearOrange today! pic.twitter.com/HjUKeUAim5

The Brady Campaign also enlisted the help of actor Tom Arnold, who wrote a letter requesting support for the gun control organization. 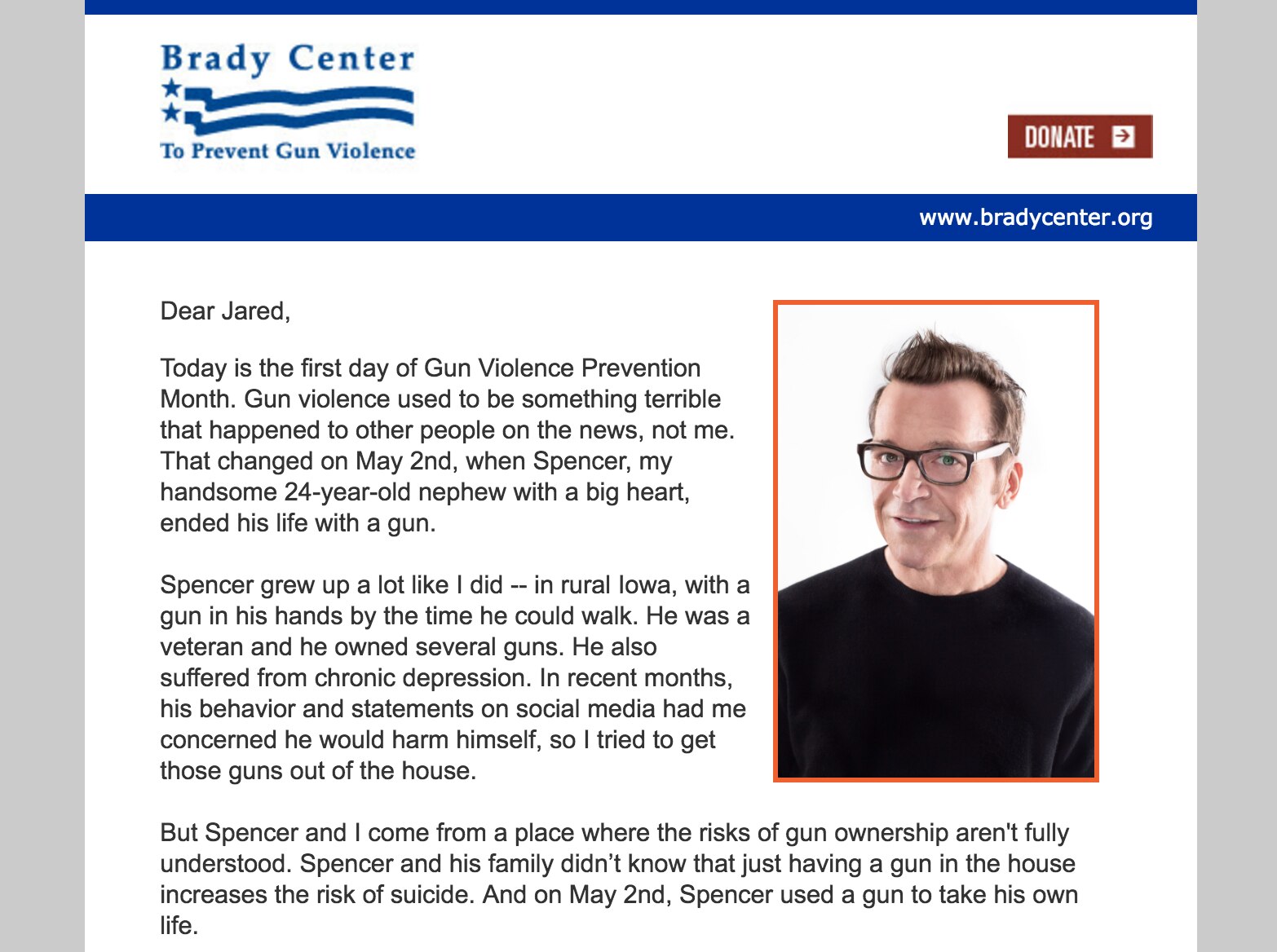 “Gun violence used to be something terrible that happened to other people on the news, not me. That changed on May 2nd, when Spencer, my handsome 24-year-old nephew with a big heart, ended his life with a gun. Spencer grew up a lot like I did — in rural Iowa, with a gun in his hands by the time he could walk. He was a veteran and he owned several guns. He also suffered from chronic depression. In recent months, his behavior and statements on social media had me concerned he would harm himself, so I tried to get those guns out of the house. But Spencer and I come from a place where the risks of gun ownership aren’t fully understood. Spencer and his family didn’t know that just having a gun in the house increases the risk of suicide. And on May 2nd, Spencer used a gun to take his own life.”