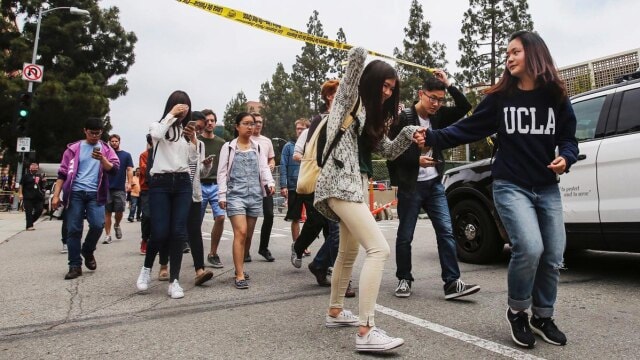 The California Assembly ushered five gun control proposals through floor votes Wednesday, with at least one lawmaker using this week’s fatal murder-suicide at a state university in floor debate.

The bills passed would seek to criminalize the possession of unserialized firearms parts, ration gun sales to one per month, ban bullet buttons, expand gun violence restraining orders and add penalties for making false stolen gun reports. All were muscled through the Appropriations Committee last week and passed the Assembly as a whole in Democrat-heavy votes.

The backer of the restraining order expansion, San Francisco Democratic Assemblyman Phil Ting, cited Everytown for Gun Safety’s statistics that the apparent murder of an engineering professor at UCLA that morning was the 186th school shooting since Newtown and the legislation was needed to help save lives.

“Right now the rights that I care about are the rights to go to school and not get shot,” Ting said during floor debate, as reported by the LA Times and echoed in a statement released by his office. “I don’t want to walk into my office and worry that I may be gunned down. Today’s shooting at UCLA was the 186th [school] shooting since Newtown, Conn., in 2012.”

However, Ting did not mention that firearms and even airsoft guns are already excluded from UCLA’s campus by both state law and school policy, making it a gun-free zone.

The measures sent to the Senate include:

AB 1673, which would change the definition of a firearm under California law to include, “an unfinished frame or receiver that can be readily converted to the functional condition of a finished frame or receiver.” Such raw components would have to be regulated in the state just like other guns including having a serial number registered with the Department of Justice, transferred through a licensed dealer, and fall under DROS fee schedules and waiting periods for first-time buyers.

Ting’s own AB 2607 would allow an employer, a coworker, a mental health worker who has seen a person as a patient in the prior six months, or an employee of a secondary or post-secondary school that the person has attended in the last six months, to petition the court for a GVRO. Under current law, only an immediate family member or a law enforcement officer may do so.

Second Amendment groups such as the National Rifle Association, California Rifle and Pistol Association and the Firearms Policy Coalition are mobilizing to try to stop the legislation.

“Although it looks grim, we aren’t out of the fight,” reads an alert from the FPC. “We’ve killed bad bills before and will do it again. And don’t forget about the wildcard of Governor Brown’s veto.”

What was defeated on the Assembly floor Wednesday was a bill to allow public access to some police body camera footage, in a 28-36 vote, without debate.

The measures have been sent to the state Senate, where they will join the pile of nearly a dozen “Gunpocalypse” bills shepherded by Senate President Pro Tem Kevin de León in an effort to short circuit Lt. Gov. Gavin Newsom’s Safety for All ballot referendum this November which seeks to achieve many of the same goals.

Newsom, it should be noted, also sent a series of tweets on UCLA and the murdered professor, William Klug, which were blasted in response on social media by those criticizing the lieutenant governor for politicizing the shooting in near-real time.