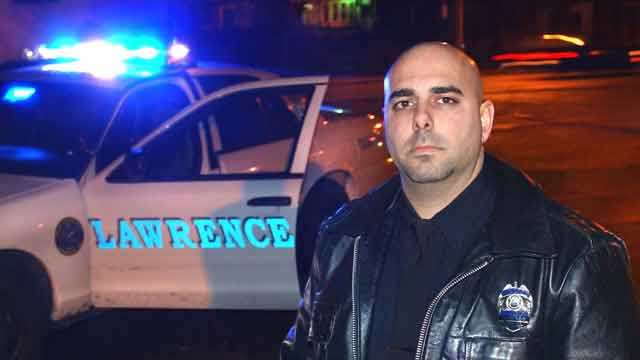 John R. Desantis, Jr. was honored in 2006 after saving the life of baby who had stopped breathing. (Photo: Carl Russo / Eagle Tribune)

A former officer with the Lawrence Police Department in Massachusetts is facing federal charges after he was arrested last week for extortion of cocaine.

According to a criminal complaint filed by FBI special agent John Walker, John R. Desantis, Jr., a 16-year veteran of the force, was habitually purchasing cocaine from a drug trafficker. The supplier was initially unaware that Desantis was a law enforcement officer. Likewise, Desantis was unaware that the drug trafficker was also acting as a confidential informant for the Federal Bureau of Investigation. The drug dealer told investigators the transactions, which were described as small, took place one to two times each week for about a year.

But on May 16, 2016, during a cocaine purchase with the trafficker at Desantis’ home, the 44-year-old officer brandished his service pistol and badge, seized two bags of crack cocaine — which were intended for sale elsewhere — and threatened the dealer with arrest if he failed to keep up the drug supply. In one of a series of text messages between the two, Desantis, allegedly told the drug dealer, “you will not be arrested at all if you do as I tell you to.”

Following an investigation, Desantis was arrested on May 26 just before midnight. He was charged with unlawfully obtaining property by extortion under color of official right and threatened force and fear.

If convicted, Desantis could face up to 20 years in prison, followed by three years of supervised release and a maximum fine of $250,000. However, the Department of Justice noted in a press release that sentences for federal crimes, which are appointed by federal district court judges and based on U.S. sentencing guidelines and other statutory considerations, are usually less than what the maximum penalty allows.

Although still considered a sworn-in officer bearing full law enforcement powers at the time of his arrest, Desantis had been on unpaid medical leave for over a year for a non-work related issue. However, Lawrence Police Chief James Fitzpatrick, who was informed of the investigation two weeks ago, noted that Desantis had been absent without leave since November 2015 because, at that point, he had used all of his medical leave benefits.