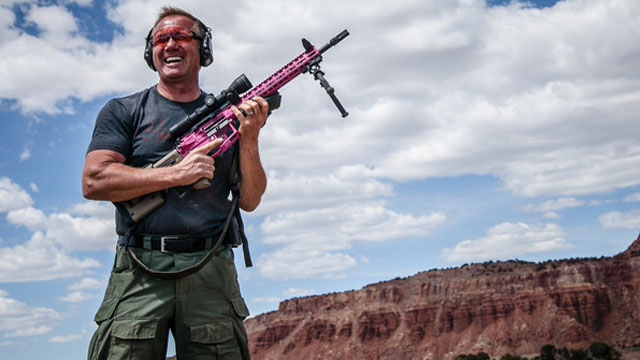 A class participant with one of the 12 Grunt rifles up for sale, on location in Utah. (Photo: EraThr3)

A dozen scoped, high-performance AR packages are now available for sale, thanks to a multi-faceted partnership between Leupold & Stevens, EraThr3, Follow Through Consulting, and several accessory makers.

“The colored guns were really inspired by a bag of Skittles,” said Sheri Johnson of EraThr3. “We were so sick of the same old black guns… so we came up with the colored guns and it turned out awesome.”

Included in the purchase is a three-day rifle course with Follow Through Consulting’s Buck Doyle in Utah (travel and meals not included).

There’s even a charity angle. For every package purchased, $1,000 will go to a yet-to-be-announced charity, or multiple charities, serving USMC veterans. B Marine combat vet and lead trainer/CEO of Follow Through Consulting, Buck Doyle, will choose the beneficiaries.

This special run of rifles, called “The Grunt,” are slightly used, having made their debut at a May 2016 three-day media event in which gun magazine and industry reps took Buck Doyle’s intensive precision shooting class in scenic Utah.

Rob Morrison, vice president of global marketing for Leupold & Stevens, Inc., said, “We’re honored to be a part of this premier package, especially given the great cause the sale is going to support.”

The guns are flashy, but they also perform. In addition to the high-tech scope, they’re outfitted with stainless/carbon 16-inch barrels, topped by a Surefire WARCOMP muzzle devices. Each has a JP enhanced bolt, an AR Gold trigger, Magpul furniture, and Dueck Defense offset sights.

Sheri Johnson, participant in the media event and EraThr3 rep, marveled at the class experience. “At some point, the Leupold and T3 reticle, along with Buck’s instruction just clicked,” she said. “From that point forward, we were all dangerous. And it was amazing to make such simple work out of engaging targets beyond 1000 meters, then come right back to 250, with zero changes to the glass.”