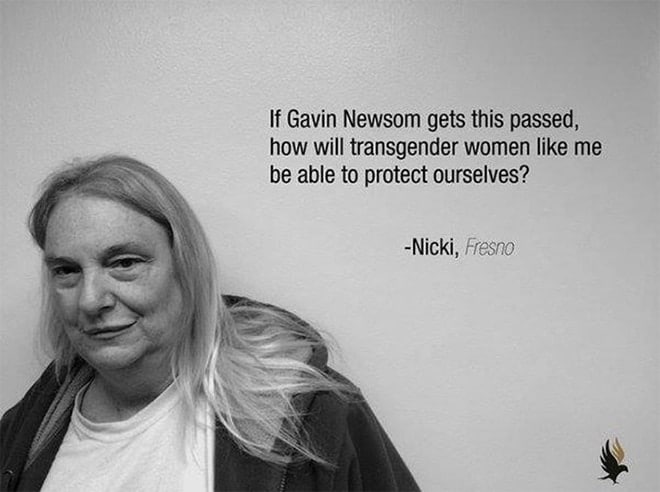 As the ballot measure proposed by California Lt. Gov. Gavin Newsom lurches toward November, it’s drawing controversy from an unexpected quarter, the Pink Pistols.  Newsom’s initiative would make possession of any magazine holding more than ten rounds illegal, even those that had been grandfathered in after previous bans and would require buyers of ammunition to pass background checks and get approval from the Department of Justice, among other new requirements.

Opposing this ballot initiative, the Coalition for Civil Liberties is running a social media campaign featuring Nicki Stallard, a resident of Fresno, who asks, “If Gavin Newsom gets this passed, how will transgender women like me be able to protect ourselves?”  Stallard is a member of the Pink Pistols, a group that recently enjoyed a victory in district court against Washington, D.C.’s may-issue carry licensing regulations.

Newsom attacked this ad campaign in a tweet claiming that “Using trans community to fight your battle of lies is arguably one of the most disgusting things you’ve ever done.

It could be argued that Newsom and the Coalition are talking past each other, since the new burdens proposed by the ballot measure would be imposed on all law-abiding Californians, but this attack on the lieutenant governor’s actions does have an ironic point.  In 2004, Newsom, then mayor of San Francisco, pushed the question of marriage equality into national attention by issuing licenses to wed to gay couples.  In general terms, I have to question anyone who picks and chooses among rights, but given the number of crimes committed against LGBT citizens, adding burdens to the right of self-defense can pose a special problem for a community that Newsom made his reputation defending.  Crimes targeting a person for gender identity or sexual orientation are on the rise, and one certain example of a tactical need for a magazine with more than ten rounds would be having to defend oneself against multiple bigoted attackers.

Despite Newsom’s claims about the opposition to his proposed new gun control, the Pink Pistols are not funded by the NRA, and the NRA Members’ Council is but one member of the broad Coalition for Civil Liberties that includes law enforcement, gun owners, and groups supporting defense rights of Jews and women.

The left wing of American politics takes pride in being the champion of the rights of the oppressed.  This defense is something that we should all be grateful for, but focusing too much on one group can foster division between groups, making us forget that rights are inherently individual, belonging to each one of us, one at a time, rather than being derived from membership in a particular demographic.  Defense of gun rights isn’t something that benefits only white, straight males comfortable with their own gender.

At present, residents of Newsom’s state have to convince their local law enforcement authorities that they have a valid need for carrying concealed weapons, and while this policy works its way through the courts, LGBT persons share with their fellow Californians the chance of being found unworthy at the whim of the issuing agency.  That’s one among many burdens that Sacramento has imposed on law-abiding people.  This is not how rights and lives are defended, nor will adding more restrictions achieve any result other than making good people more vulnerable.