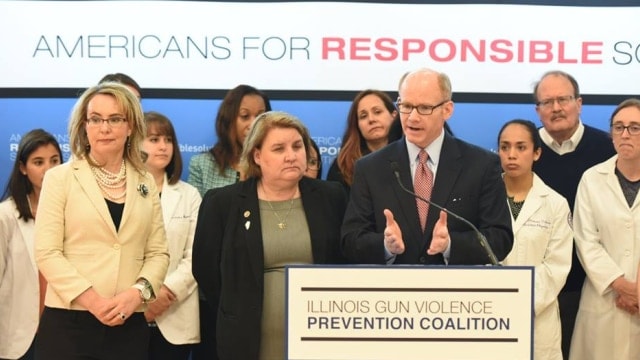 The bill, HB 1016, was originally an environmental regulatory change introduced by Rep. Michael J. Madigan, D-Chicago, in February, but switched to Rep. Kathleen Willis, D-Addison, in May and was amended to bring a host of regulations to federally licensed firearm dealers in the state. It came up short this week at the end of session with a final vote of 43-55.

“We’ve been working on these issues for years, and the key thing I’ve learned is this: somewhere in the stream of commerce between a gun manufacturer and a crime scene there is someone purporting to be a law-abiding gun owner, buyer or seller who is anything but,” said Harmon in conjunction with a press conference featuring Willis and former U.S. Rep. Gabby Giffords and Mark Kelly last month to support the initiative.

Besides the backing of the Giffords/Kelly national group, their newly formed state affiliate– the Illinois Gun Violence Prevention Coalition– stumped for the measure arguing polling data supported requiring gun dealers to be licensed with the state. In a statement, the group cited a “dirty procedural maneuver by the other side” that left the House “unable to hold a fair vote on the bill this session,” as the reason for the proposal’s demise.

Gun rights advocates welcomed the news of the bill’s defeat.

Pearson argued the additional red tape and cost could have forced licensed gun dealers out of business.

“If enacted, Kelly’s bill would result in jumps in retail prices of firearms by $100 or more along with doubling the price of a box of ammunition,” he said. “Kelly’s bill would foist an unbearable regulatory burden on lawful firearm retailers which would cause many, if not most to close their doors.”

For their part, gun dealers found little reason to like the measure.

Willis is expected to refile her legislation in the fall.