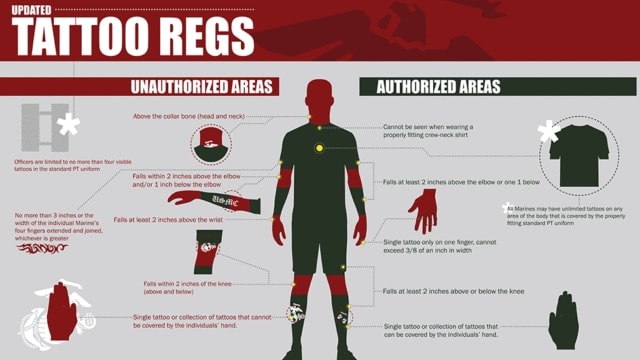 Seem pretty easy to figure out.

Published Thursday is a 32-page guide complete with two new measurement tools and prohibitions against getting tattoos on the head, neck, inside the mouth, wrists, knees, elbows and (most of) the hand.

“The Commandant and I have been talking with Marines throughout the Corps during our visits and we’ve taken their questions and comments to heart because it continues to be important to Marines,” said Sgt. Major Ronald L. Green, Sergeant Major of the Marine Corps, in a statement to accompany the new guidance, which replaces all prior policy.

In general, Marines cannot have ink that shows when wearing the standard PT uniform, which includes above the collar bone, elbows, knees, or wrists. Hands are tricky as a single tattoo than can be covered by the individual’s hand or a around one finger, such as a inked wedding band, are allowed, while those than cannot be covered are forbidden.

Tattoos that are visible in the PT uniform on the arms or legs but are still at least two inches above or below the knee or elbow itself are fine. To ensure uniformity, the Corps has spent lean muscle tissue in creating two measuring tools just for said knees and bows.

Officers are limited to no more than four visible tattoos in the standard PT uniform.

The full 32-page guidance, including the tools, is available here.