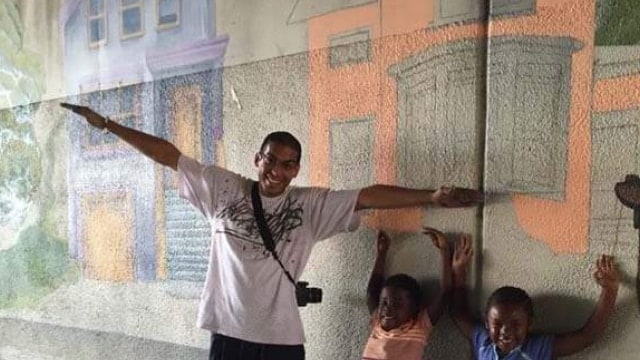 Ramos was shot and killed on Sept. 29, 2015 while working on a mural project under the I580 overpass in Oakland. (Photo: Facebook)

An administrative claim was filed with the Department of Homeland Security this week relating to the death of artist Antonio Ramos last September with a gun stolen from the car of a government agent.

Ramos, a 27-year-old muralist working on Oakland Superheroes Mural Project, a community outreach group whose primary goal is to end violence by introducing area at-risk youth to the arts, was shot in broad daylight in an apparent robbery gone bad.

Charged with Ramos’s murder is Marquise Holloway, 20, who maintains he shot the artist by accident.

The gun used by Holloway to kill Ramos, a government-issued Glock 26 9mm caliber pistol, was stolen on Sept. 13, 2015 from an unattended vehicle parked in the vicinity of Second Street and South Park Street in San Francisco — a high crime area — by an immigration and Customs Enforcement agent who was visiting the city.

That part of the city had experienced a staggering 5,508 auto break-ins in the six-months before Ramos’s death, more than twice the average for other parts of the city.

The gun was inside a bag with three loaded magazines, the agent’s badge and a baton. It was not secured with the agency-required safety-locking device or in a lockbox.

The 167-page claim made on the behalf of Teresa Lopez and Red Ramos, Antonio’s parents, takes the government to task for what it characterizes as shoddy and irresponsible practices in firearm storage.

“Unfortunately, this is a rampant, agency-wide problem for ICE that has been well-documented for nearly a decade,” said Frank Pitre of Cotchett, Pitre & McCarthy, the firm representing the Ramos family, in a statement. “Despite ICE’s knowledge and awareness of the problem and despite recommendations by other government agencies for corrective action, ICE agents continue to have their unsecured firearms stolen at alarming rates.”

The claim references a 2010 report from DHS’s Office of Inspector General that found 179 of the 243 firearms — or 74 percent — lost between 2006 and 2008 were lost due to failure of the agent to properly secure the weapon, and according to the OIG, “all 179 losses may have been prevented had the officers properly safeguarded their firearms.”

These included incidents where ICE officers drove off with a gun on the bumper of a vehicle and left firearms in places such as a fast food restaurant parking lot, a bowling alley, and a clothing store. In one case, an ICE officer stored the keys for his assigned government-owned vehicle next to a windshield wiper blade in plain view with an unsecured firearm, radio and body armor left inside the vehicle.

Pitre, who is also representing the parents of Kathryn Steinle, killed as she was walking along San Francisco’s iconic Pier 14 with a gun stolen from a the car of another federal agent, says the Ramos family is fundamentally seeking that ICE be held accountable and change their policies to better safeguard their weapons.