Iowa sisters to take on state capital over gun rights 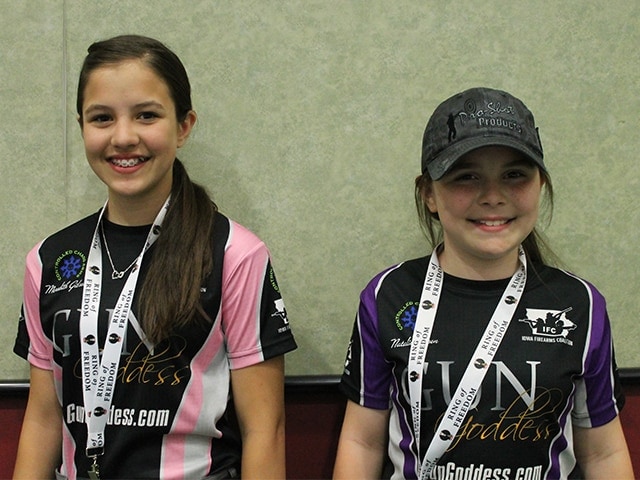 The Gibson sisters bounded into the press room at the NRA Meeting in Louisville animatedly talked back and forth about the guns and gear dotting the floor of the Kentucky Expo Center last month. On the outside, they look like regular girls but these two sisters are anything but ordinary.

Meredith Gibson, 12, and Natalie Gibson, 10, are youth 3-gun competitors who have taken on Iowa lawmakers for the last three years. Combating an outdated law limiting youth handgun shooting, the Gibson sisters have made it their mission to allow young people to include handguns in their training and competition. While rifles and shotguns are fair game for young shooters, Iowa restricts the handling of handguns to those over the age of 14. Due to the current law, the girls are forced to go out of state to practice and compete.

The Gibson sisters’ bill proposes eliminating the age requirement, leaving it up to parental discretion to determine the best time to introduce handguns. The bill has made it through the Republican-backed house of representatives every year for the past three years, but stalls in the Democratically-held Senate. The two girls point to Senate Judiciary Committee Chairman Steven Sodders as the reason the bill has floundered on the steps of the state Senate.

“We have thirty-seven senators that support us, but Senator Sodders doesn’t want to give it to one of those people who support us,” Natalie told the Washington Free Beacon.

The sisters plan on going door to door over the summer to gain support for another battle against Iowa’s capitol.

Meredith and Natalie, who began shooting at the age of 5 and entered competitive shooting soon after, are determined to not only change Iowa’s law but also change people’s perception of youth shooters.

“This is a sport to me and I tell everyone no one can take my sport away from me,” Meredith told Guns.com at the NRA convention.

Swathed in pink and purple, the Gibson sisters nabbed Guns.com’s attention at the meeting because of their bubbly personalities and obvious enthusiasm for the sport. The girls eagerly discussed shooting and even relayed the importance of safety when wielding firearms.

“You really have to learn, before you shoot, the three safety rules which are make sure your gun is pointed in a safe direction, don’t put your finger on the trigger until you are ready to shoot and make sure of what’s behind your target,” Natalie said.

The two girls hope their involvement in the sport not only raises awareness on safe gun handling but also influences other youth, especially girls, to take up shooting.

“It’s really fun and I bet they would enjoy it,” Meredith said. “Girls can do anything boys can do.”

Natalie kept it simple when asked what she would say to those that say shooting is a man’s sport.

“I’d challenge them to a duel,” she said.

The girls intend to bring that spitfire attitude and tenacity to the Iowa capitol this summer as they continue to fight for their gun rights.