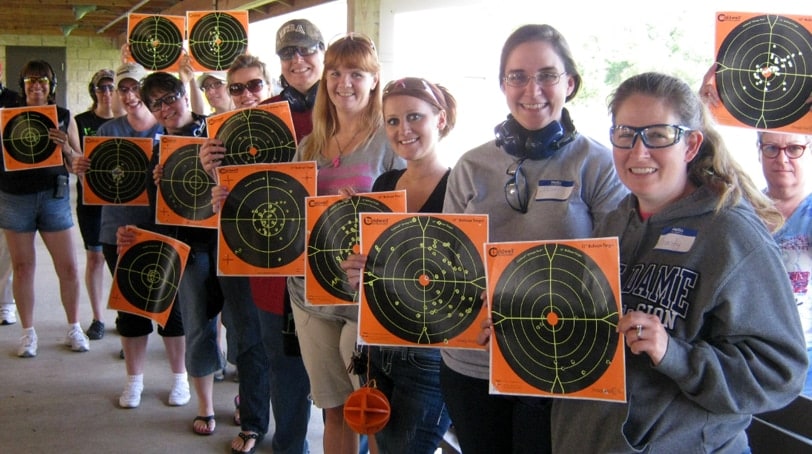 Southwick Associates’ of Florida recently published results of its 2015 survey of sporting-related activities by the sexes and the results seem damning for an industry seeking to sell wares to women involved in shooting.

While the report is called Women in the Outdoors in 2015: a study of women’s activities, perceptions, purchases, and related media consumption related to fishing, shooting and hunting, only a handful of women participated.

On most measures of shooting participation, i.e. bow/archery and crossbow use, men and women reported relatively similar patterns. However, 17 percent more men reported using both rifles and handguns. While only 13 percent of male respondents reported muzzleloader use, that’s nearly double the 7 percent of women who reported the same. 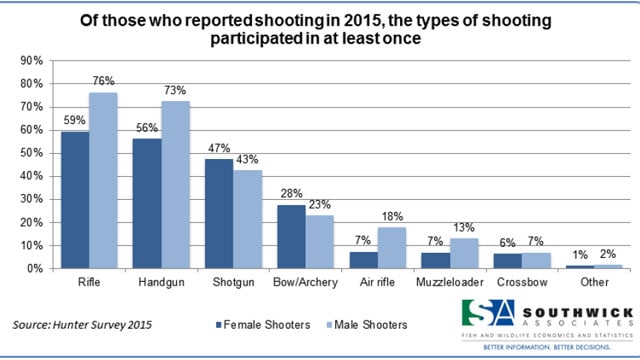 Southwick Associates provides market consulting for sporting industry retail and media outlets. This report an apparent attempt to satisfy the industry’s need for information regarding a population often referred to as the fastest-growing consumer segment of the industry: women. However, the report’s title is a bit of a misnomer, as it provides the same, and probably better quality, data for male consumers.

Data are gathered through the firm’s online survey, which offers a chance to win a sporting goods store $100 gift card as an incentive. Although users must disclose their zip code as part of taking the survey, no geographic information is provided regarding the respondent pool.

Observing the chart above, one can see that more female respondents said they shoot rifles than handguns. A greater percentage of females reported using a shotgun than males.  Upon closer examination, the reader discovers the female sample size for this survey was only 82, while 5,030 males responded.

Here’s another example of the findings, taken directly from the report, showing 2015 hunting and shooting related purchases: 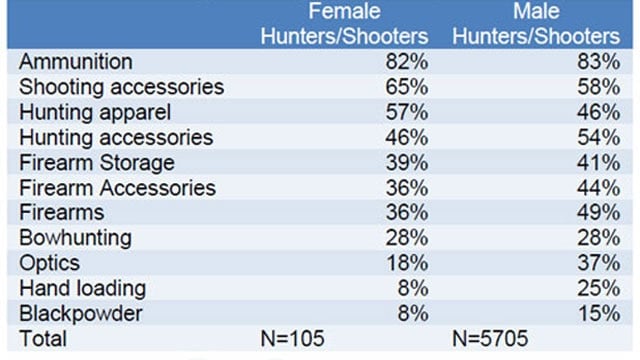 Note there are only 105 female versus 5,705 male respondents, so results may or may not reflect reality.

There’s plenty of anecdotal information in the industry about female involvement becoming more prevalent. If companies really want to connect with the female market, more in-depth information is needed.  The dearth of quality information, especially regarding first-time gun buyers and new shooters, is a hole in the fabric of the firearms industry.