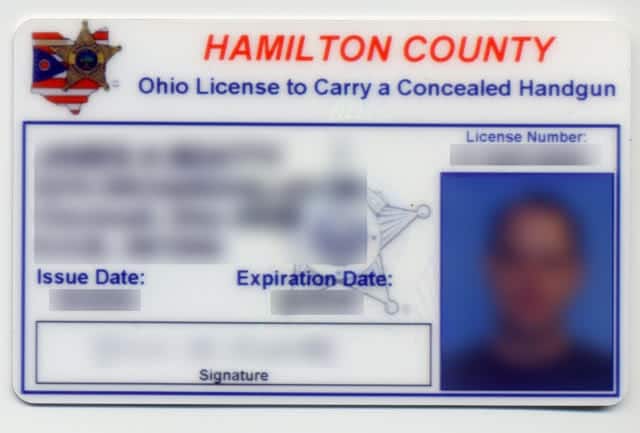 An example of an Ohio carry license.

An Ohio-issued concealed handgun license can now serve as an alternative to a federal background check when transferring a firearm in the Buckeye state, according to an open letter from the Bureau of Alcohol, Tobacco, Firearms and Explosives.

The agency said it determined the state license qualifies as an alternative to the federal process — known as the National Instant Criminal Background Check System — defined by the Brady Handgun Violence Prevention Act.

Under federal law, before a federal firearms licensee can transfer a firearm to an individual, the patron must first pass a criminal background check.

Ohio’s attorney general as well as state gun groups praise the efforts to remove redundancies in the process.

“I’m pleased Ohio concealed carry license holders will not have to undergo additional background checks each time they want to buy a firearm,” he Mike DeWine, the state’s attorney general, in a statement.

“Ohio concealed carry license holders who are in good standing have already passed thorough state and federal background checks so there is no reason to force them to submit to additional checks if they want to buy a firearm,” he said.

The change stems from a bill that state lawmakers passed in 2014 to improve the state’s background check process so they align with federal law, according to the Buckeye Firearms Association.

But there is a caveat to the new rule regarding the date the license was issued. The rule applies to licenses issued on or after March 23, 2015, so those with a license issued before that date still need to undergo a NICS check before a transfer.

Also, if a license holder commits a disqualifying offense, local authorities are notified and can revoke the license and, therefore, revoke the ability of the CHL holder to use the license to purchase a firearm, BFA said.

Ohio is the 25th state to receive a NICS exemption for its concealed handgun license holders. The NICS check is valid for five years, the same as the state’s CHL.