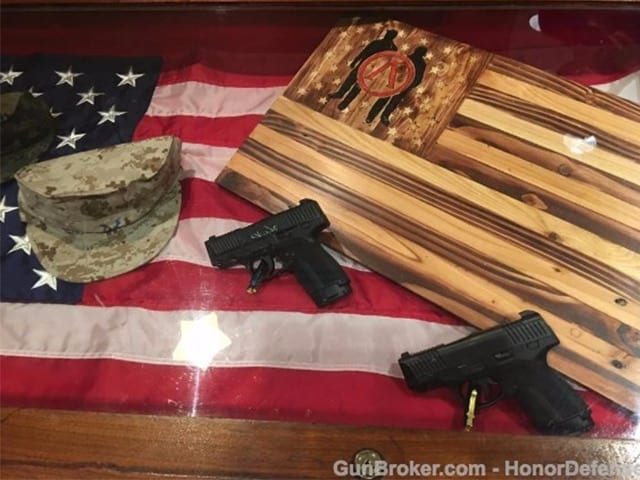 Honor Defense created a signature series of its Honor Guard pistol to be auctioned off in benefit of  the Duskin & Stephens Foundation.

Gary Ramsey, president of Honor Defense, said it was an honor to pair with the best-selling author, commentator and TV host. “We’re thrilled to support Duskin & Stephens Foundation and partner with Lt. Col North,” Ramsey said. “We greatly appreciate his partnership.”

North is a prominent conservative figure. He served in the United States Marines from 1968 to 1990. A best-selling author, commentator, and TV host on “War Stories with Oliver North,” he’s also known for his role in the Iran-Contra scandal of the 1980s.

GunBroker is handling the online auction, which is ongoing and will run until July 4th. Proceeds from the sale will go to the Duskin & Stephens Foundation.

Ryan, board member of the foundation, said proceeds from fundraisers benefit the families of fallen soldiers in numerous ways. “Our mission is to support the United States Special Operations community through direct support to families of fallen operators, healing programs designed to combat the effects of PTS, TBI and loss of a loved one and youth scholarships for children of active duty members of our community,” he told in Guns.com in an email.

The foundation was named for “Big Mike” Dustin and Riley Stephens who served in the Army’s 1st Battalion, 3rd Special Forces Group (Airborne). Both men died in 2012 in the Wardak Province of Afghanistan while supporting Operation Enduring Freedom.

Bidders are not just vying for the chance to own the autographed Honor Guard pistol but also for a flag crafted from barn wood. The Duskin & Stephens foundation included the flag, which was hand-made by a Green Beret. It’s worth noting that Honor Defense prides itself on being an American made company.

“Every piece of this pistol was made in America by American companies,” Ramsey told Guns.com at the NRA Meeting in Louisville.