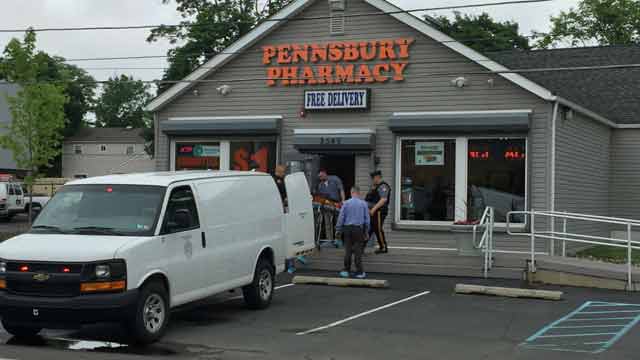 A robbery suspect is dead and his accomplice charged with homicide after an attempted robbery Friday was thwarted by a pharmacist armed with a 9mm pistol in Levittown, Pennsylvania.

The suspect was wearing what was described as a frightening Halloween mask and concealing a shotgun covered by a partially opened umbrella. He entered the pharmacy around 10 a.m. as his accomplice sat in a getaway van parked outside the front entrance.

But the owner of Pennsbury Pharmacy, Kenneth Lee, saw the suspect approaching, tripped a silent alarm and yelled out at him, warning him that he was armed and not to enter the store. The suspect did not heed Lee’s warning and continued to advance toward him. When the suspect aimed the shotgun in Lee’s direction, the pharmacist opened fire on the would-be robber, striking him numerous times. Lee was the only one in the pharmacy at the time and was uninjured.

Meanwhile, the getaway driver was unaware of what had transpired inside. Falls Township Police Lieutenant Henry Ward told local media the second suspect would have had the opportunity to flee had he known what happened, but he didn’t. Officers arrived on the scene within about two minutes, and quickly surrounded the getaway van, which was determined to be stolen out of New Jersey and occupied by the second suspect, identified as 54-year-old Kim Goldsboro, The Inquirer reported. He was taken into custody without further incident.

Ward confirmed the first suspect, later identified as Willie A. Bozarth, 33, was pronounced dead inside the pharmacy. Goldsboro now faces robbery charges as well as criminal homicide for Bozarth’s death.

Bucks County District Attorney David Heckler said there is “no thought” of Lee facing charges. Likewise, Lt. Ward said Lee, who just opened the store in December, was left with no other choice and was protecting himself and his business.

Ward added that Friday’s incident was one of several recent robberies involving local pharmacies. He said the city — like many across the country at this time — is battling what he called a bad heroin problem. He said in the last four years they have seen 60 heroin-related deaths. However, Ward also noted that he did not believe Bozarth and Golodsboro are addicts, but instead believes they were looking for drugs to turn a profit.