2A win handed down in New Hampshire carry rights case 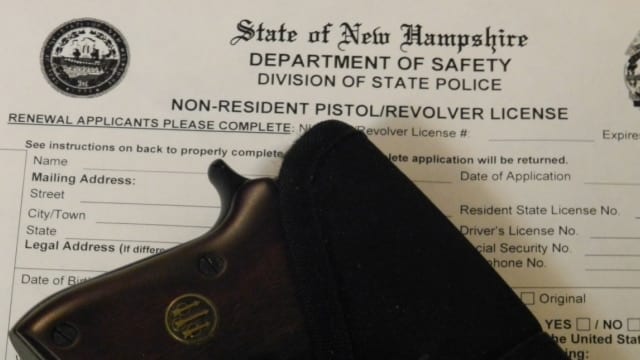 The high court for the Granite State found that regulators made unlawful changes to how New Hampshire grants non-resident permits. (Photo: Chris Eger/Guns.com)

Scott Bach is the executive director of the Association of New Jersey Rifle and Pistol Clubs, and, due to restrictive may-issue practices in his home state, from 2004 to 2013, held a New Hampshire nonresident license to carry a concealed handgun. The reason Bach could no longer renew his permit in New Hampshire was that the state Department of Safety changed the rules for non-residents to require that applicants first have a valid carry permit in their home state.

This led Bach and ANJRPC to file a claim against the Department that was rejected by a lower court in October 2013 which held there was “neither a state nor federal constitutional right to carry a loaded concealed weapon, and, even assuming that such a right existed, the administrative rules at issue do not unreasonably infringe upon that right.”

Not deterred, Bach and the gun rights group argued the case to the New Hampshire Supreme Court in February, which took his side in the argument 100 percent, saying the licensing authority overstepped its bounds and implemented a regulation that is not protected under state law.

“Further, we cannot disregard the fact that residents of certain states, like New Jersey, may simply be unable to satisfy state requirements for a license that differ from New Hampshire’s statutory requirements,” Associate Justice James Bassett wrote for the majority in a seven-page ruling that bounced the regulation.

“Accordingly, we conclude that the challenged rules – requiring nonresidents to provide proof that they hold resident state licenses in order to obtain concealed-carry licenses in New Hampshire – are ultra vires and, therefore, invalid,” noted Bassett.

Bach welcomed the news and told Guns.com the subtle regulatory change at the heart of the New Hampshire challenge is not a fluke.

“New Hampshire’s unilateral rule change is not an isolated attack on non-resident right to carry – it is part of a developing national pattern which began in Pennsylvania and most recently surfaced in Virginia,” said Bach in an email.

“Restricting non-resident carry is apparently low-hanging fruit for anti-gun bureaucrats in the executive branch of these state governments,” said Bach. “The unanimous ruling from the New Hampshire Supreme Court reopens non-resident carry in the Granite State to millions of Americans, and should be a wake-up call to the gun ban lobby that their latest tactic to chip away at Second Amendment rights will not go unchallenged.”

Guns.com reached out to the New Hampshire Department of Public Safety Commissioner for comment and will update this piece if one is obtained.