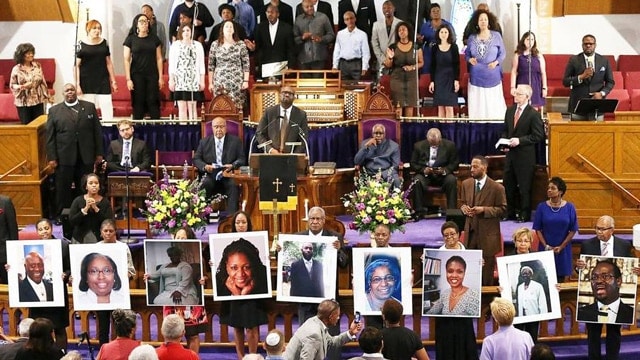 Pictures of the nine people gunned down at the Emanuel AME Church in Charleston in June 2015 were held up by congregants during a prayer vigil at the the Metropolitan AME Church in Washington, D.C. (Photo: Win McNamee/Getty Images)

A trial date has been set alongside a timeline for procedures for the man accused of shooting nine people at a historic black church in Charleston, South Carolina, last year.

Dylann Roof is scheduled to stand trial in a Charleston federal court on Nov. 7, according to documents filed Tuesday. If convicted, he faces a possible death sentence.

A federal judge ordered a comprehensive schedule for the case on matters that need to be addressed sooner rather than later. According to the order, Roof must file his intent to waive or demand a jury trial by June 10, the government has until June 21 to respond, and both parties have been given rules and deadlines to negotiate jurors.

In the case, the Justice Department is pushing for a death sentence because of the nature of the crime. Last June, Roof, a white man, attended a prayer service at the Emanuel AME Church and after an hour sitting with congregants, he opened fire. He was arrested the next morning at a traffic stop in Shelby, North Carolina. He confessed that he hoped the massacre would ignite a race war.

“The nature of the alleged crime and the resulting harm compelled this decision,” said U.S. Attorney General Loretta Lynch on May 25.

In court documents, prosecutors cited two offenses that carry a possible death sentence that includes obstruction of exercise of religion by force resulting in death and use of a firearm to commit murder during and in relation to a crime of violence.

Last summer, Roof’s attorney said he was willing to enter a guilty plea in exchange for a sentence of life in prison.