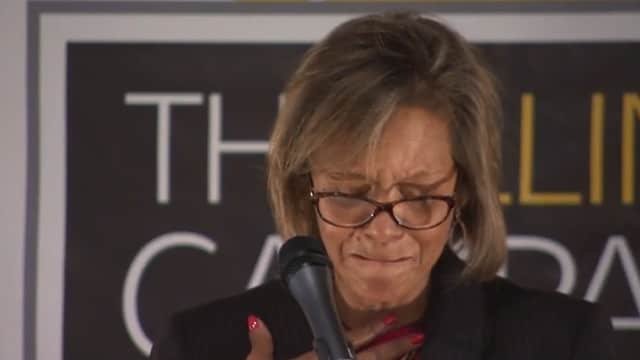 U.S. Rep. Robin Kelly, D-Ill., teared up when speaking of gun crime in Chicago, referring to the issue as a public health epidemic just days after she signed a letter seeking federal funding for gun violence research. (Photo: ABC 7 Chicago)

A charge led by House Democrats is calling on the chamber’s leadership to repeal longstanding roadblocks to spending federal dollars researching gun deaths and accidents as a health care issue.

The lawmakers sent a letter— signed by U.S. Reps. Debbie Wasserman Shultz of New York and Robin Kelly of Illinois among others– calling for an end to the ban on funding allocations as outlined by the Dickey and Rehberg Amendments which prohibit the Centers for Disease Control and other agencies from studying gun-related incidents as a public health problem.

“Instead of continuing the status quo, let’s allow the research community to investigate evidence-based solutions that could help prevent gun violence while still protecting the rights of law-abiding gun owners,” reads the letter in part.

The letter is the latest in a series of such moves putting pressure on Congressional Republicans to cease to sandbag research that could be used to promote gun control.

Last month, a coalition of more than 100 health care, science and research universities and other groups wrote their own open letter to Congress while many of the same Democrats associated with this week’s effort had earlier signed a document last November calling for the same thing.

They contend the move is needed to help save lives.

“Knowledge is power. And when we’re dealing with a gun violence problem of epidemic proportions, we need every tool at our disposal,” said Kelly in a statement. “The only way we can craft meaningful legislation to combat gun violence is to have a full and accurate assessment of the impact of gun violence on our communities, our public health and on our economic future. Lifting the ban on federal gun violence research is a crucial step in stemming senseless gun violence and making our country safer.”

Kelly broke down at a luncheon this week in Chicago as she referred to the gun violence in the country as a public health epidemic.