Bill to criminalize some gun sales in Illinois awaits signature 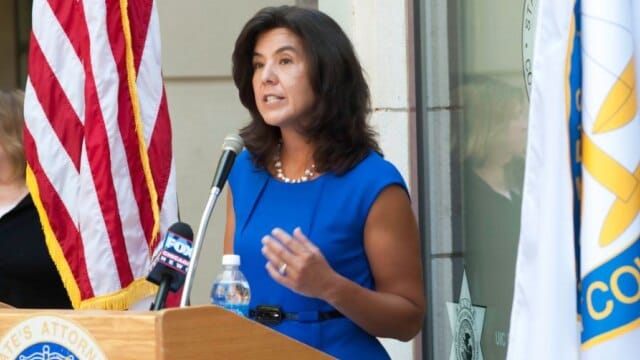 A measure penned by Cook County State’s Attorney Anita Alvarez seeks to curb Chicago’s gun problem by going after those who sell guns in the state without a license or firearms card. (Photo: Anita Alvarez/Facebook)

The Democrat-led Illinois General Assembly sent a measure to Gov. Bruce Rauner creating a new felony charge for selling a gun or ammo in the state without a Firearm Owner’s Identification card.

The measure, aimed at curtailing interstate gun trafficking, was authored by outgoing Cook County State’s Attorney Anita Alvarez and pushed through the legislature with House Leader Jim Durkin as chief sponsor and Senate Leader Christine Radogno as the standard bearer for the legislation in that chamber. There was not a single vote cast in opposition to the bill in either its Senate or House roll call last month.

“We know that illegally trafficked guns contribute directly to the excessive rate of gun crime here in Chicago and we must continue to work to identify and implement new strategies that target these offenders,” said Alvarez in a statement. “With shootings and gun violence at epidemic levels here in Chicago, this measure could not come at a more important time.”

The proposal, HB 6303, creates for the first time in Illinois the offense of firearms trafficking. Under its guidelines, anyone who purchases a gun or ammunition outside of the state, even if it was a legal purchase, and then brings it back to the Land of Lincoln and resells it without a Federal Firearms License or a Illinois FOID card could incur a Class 1 Felony charge which could earn them up to 20 years in prison.

This would upgrade to a Class X Felony with up to 60 years behind bars on subsequent charges or if the accused had a prior conviction on other gun related crimes.

The Chicago Police Department traced some 50,000 recovered guns between 2001 and March 2002 and found that, while 15,000 came from just outside the city limits in Cook County, more than half of the overall total came from outside the state.

Rauner, a Republican, has argued in the past that he believes policies should keep guns out of the hands of those who shouldn’t have them, but cautioned that “Going much beyond that raises all kinds of constitutional questions and we’ve got to be very cautious.”

As for Alvarez, the legislation is something of a last hurrah for her tenure, having lost the Democratic primary for her office to Assistant State’s Attorney Kim Foxx in March.