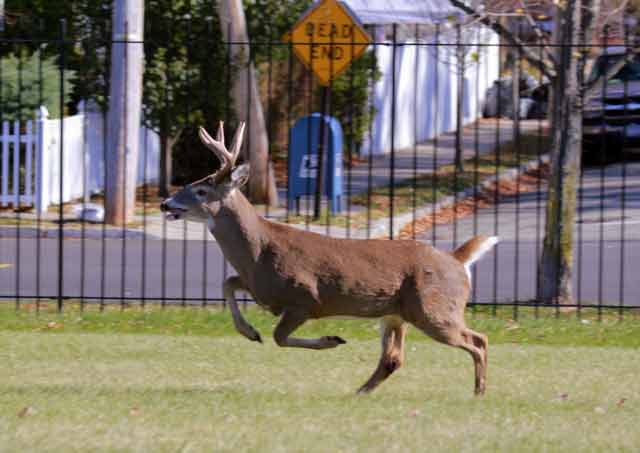 A deer frolicking through the grass unaware to the fact that someone wants to sterilize him.

In an effort to reduce the overcrowded deer population on Staten Island, the city is moving forward with a $2 million plan to keep some of the stags from reproducing.

“On Tuesday, the Comptroller’s office gave approval for the Parks Department request to use an emergency procurement to initiate a three-year sterilization study of deer on Staten Island,” said spokesman Eric Sumberg.

Officials estimate the current deer population lies somewhere in the ballpark of 700 to 1,000. Experts warn of the dangers deer may pose, which include spreading tick-borne illnesses and causing car accidents, in addition to the potential for property damage.

The plan is set to roll out in September and will consist of hundreds of bucks being tranquilized and vasectomized, then released back into the wild.

But not all experts agree clipping the critters’ huevos is the best option. “It’s difficult for me to come up with all the reasons why this is a really stupid plan,” Bernd Blossey, an ecologist at Cornell University, said last month. “It’s ridiculous from the onset.”

Paul Curtis, another ecologist at Cornell, echoed a similar sentiment, also noting that the plan ignores the science surrounding basic deer biology. “This plan has very low likelihood of success,” Curtis said, pointing to a similar plan that was implemented in Ithaca, but didn’t get very far.