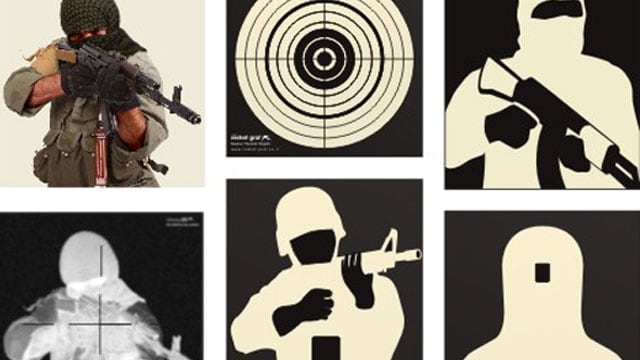 Examples of ThermaReal targets to be shown at Eurosatory 2016. (Photo: Reshet Graf)

Israel-based Reshet Graf, a company specializing in thermal target tech, will unveil a new level of realism in its targets next week at Eurosatory 2016.

Reshet Graf’s new line of ThermaReal targets are made for training soldiers in the use of thermal devices. The targets absorb the visible light spectrum but reflect only infrared. Thus, they glow brightly when viewed, in day or night, using an IR viewing device. Targets made of this material are useful in training soldiers to not only use IR equipment, but also to recognize and judge potential threats for battlefield decision-making.

“We developed this family of targets in response to the needs of our customers for targets that closely simulate the battlefield – and enable them to conduct training that is as realistic as possible in order to effectively prepare fighters for battle,” said Albert Ohayon, the company’s chief executive officer.

ThermaReal targets are made for extended, all-weather use. Precipitation doesn’t deteriorate them. Bullet holes in either “cold” or “hot” zones can be patched with Reshet Graf stickers made for that purpose, so evaluating multiple engagements on a single target is no problem.

The company has an existing product selection of targets, patches, and equipment panels that operate passively, that is, they require no power source. The new targets show a range of subtleties in reflection, providing a realistic appearance for battlefield training.

Ohayon said his company builds the products from raw material to finished product, and they cater to 20 countries.

Their showcase, Eurosatory 2016, is Europe’s annual expo for defense and security agencies. This year, it will be held June 13-17 in Paris.