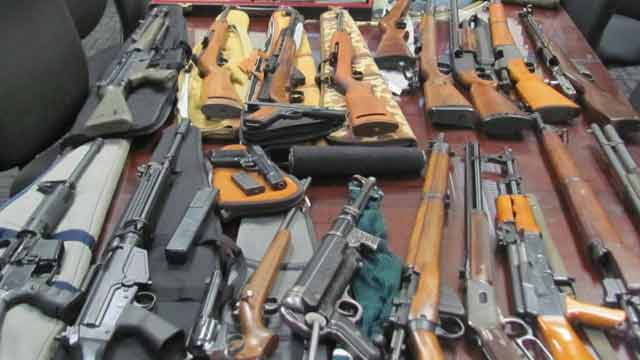 Ronald Amster, a convicted felon, now faces a slew of charges after all of this was found in his home. (Photo: La Habra Police Department)

A tip to authorities led to the discovery of a cache of weapons and drugs in the hands of a convicted felon on Sunday in La Habra, California.

According to a statement by the La Habra Police Department, the person who provided the tip was particularly concerned about the safety a child who lived at the home, noting that the adults at the residence were in possession of both firearms and narcotics.

Authorities arrived on the scene around 3:50 p.m. and came in contact with 41-year-old Ronald Amster outside of the home. Police discovered Amster, a convicted felon, was in possession of illegal drugs and paraphernalia. Amster was arrested and while in custody, officers conducted a search of the home.

Authorities discovered multiple weapons, ammo and high-capacity magazines, as well as a silencer and body armor. Altogether, 21 long guns were recovered, in addition to three handguns. Amster is now facing multiple charges, including being a felon in possession of firearms and ammunition, drug-related and child endangerment/abuse charges.

When police searched the home, however, the child, whose name or age was not given, was not found inside the residence. Authorities later learned the child was, in fact, safe and in the care of another relative.

According to records from the Orange County Jail, Amster is being held on a $55,000 bond and his next court appearance is set for June 15.

Authorities said the tip about the guns and drugs was submitted to the police department through the use of “TIP411,” a web-based a smartphone app that can be utilized to submit tips anonymously and with ease.

The app also allows for two-way communication between police personnel and tipsters. The service can be found at www.tip411.com or downloaded as an iOS or Android app. Authorities note the app is not for crimes in progress or other emergencies.