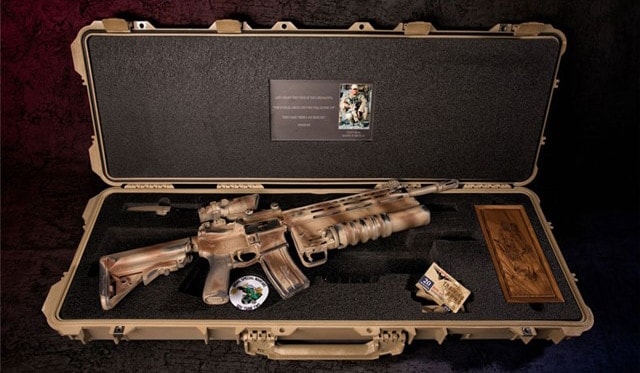 A rifle designed in honor of Navy SEAL Danny Dietz, a heroic communications operator killed in the infamous Operations Red Wings, is up for auction with all proceeds going to nonprofits set up in his name.

The rifle up for auction is a modernized replica of the one Dietz carried into battle. The serial number “Dietz10” was selected by Dietz’s mother, Cindy Dietz-Marsh, to honor her son and SEAL Team 10.

In addition to the serial number, the rifle has three significant engravings. The first is his last known drawing — the Virgin Mary kneeling beside a manger with the baby Jesus — which he sent to his mother for Mother’s Day in 2005. The others are Dietz’s signature next to a “Bone Frog with Trident,” the skeleton of a frog symbolizing Navy SEALs who “lost their skin” fighting. 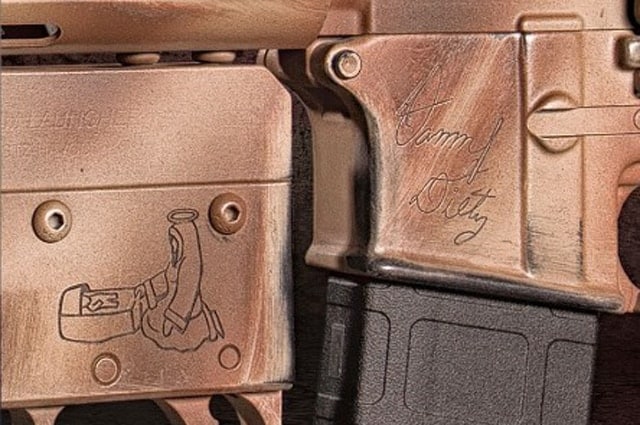 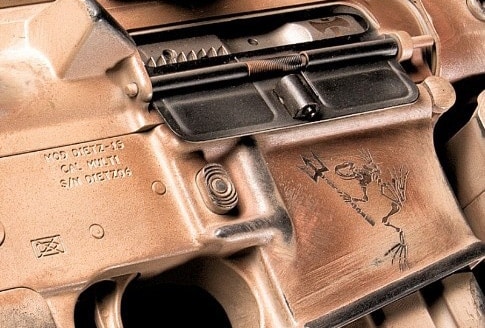 Proceeds of the sale will benefit the Danny Dietz Memorial Fund and the Danny Dietz Leadership and Training Foundation. In a statement on the listing page, the groups called him “the definition of tough.”

“He knew if things had to be done you could never give up. That’s what he did He was shot five times had many broken bones he never even thought of quitting. Dietz fought until he could no longer lift his rifle and died for his country. Danny Dietz believed in honor and died an American hero,” they said. 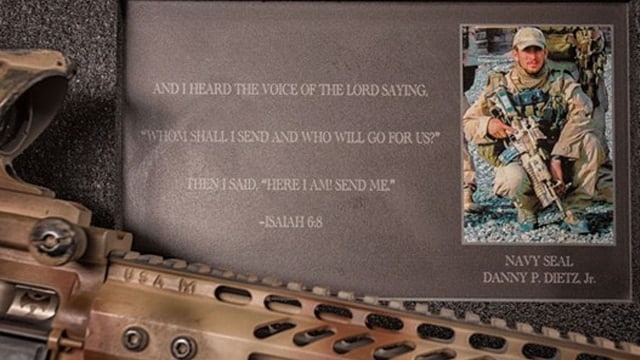 Operation Red Wings was a special operation mission in Afghanistan in the summer of 2005 in which 19 servicemen were killed. It’s known as one of the worst single combat losses for the SEALs in the program’s history. A detailed account of the event was captured in the book Lone Survivor by the only surviving member of the U.S.-led mission, Marcus Luttrell.

Tasked with surveilling Taliban fighters and finding a key leader in a mountainous region of eastern Afghanistan, the four-man team that included Dietz and Luttrell were spotted by Taliban sympathizers who gave up the SEAL’s position. As the team moved out of position, they were overwhelmed by “a much larger enemy force with superior tactical position.”

During a fierce gun battle, Dietz radioed for help, but the responding Chinook helicopter was shot down by a rocket-propelled grenade, killing eight SEALs and eight Army Night Stalkers. Of the initial team, Dietz, Michael P. Murphy, and Matthew Axelson were also killed.

Dietz, 25, of Aurora, Colorado, enlisted in the Navy in 1999, earned his SEAL trident in 2001 and was subsequently assigned to SEAL Delivery Vehicle Team Two in Virginia Beach 2003.