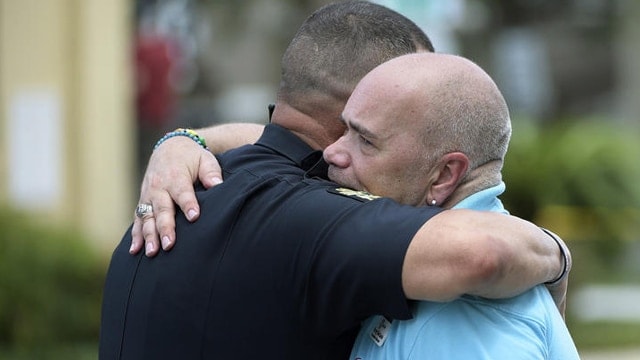 Terry DeCarlo, executive director of the LGBT Center of Central Florida, right, is comforted by an Orlando police officer after a shooting involving multiple fatalities at a nightclub in Orlando on June 12. (Photo: Phelan M. Ebenhack/AP)

An attack on a gay nightclub in Orlando — by a shooter allegedly angry at the sight of men kissing — during gay pride month that resulted in 50 dead and 53 injured serves as a reminder of just how vulnerable lesbian, gay, bi-sexual and queer individuals are to violence, gay rights groups say.

“This is exactly the kind of heinous act that justifies our existence,” said Gwendolyn Patton, speaking on behalf of gay gun rights group Pink Pistols before dismissing calls for gun control. “At such a time of tragedy, let us not reach for the low-hanging fruit of blaming the killer’s guns.”

While some pro-gun groups usually keep their heads down following such tragedies, Pink Pistols opened up.

“Let us stay focused on the fact that someone hated gay people so much they were ready to kill or injure so many. A human being did this. The human being’s tools are unimportant when compared to the bleakness of that person’s soul,” she said.

Much like other pro-gun groups, Patton criticized gun-free zones, but also suggested groups going out to party should have a “designated carrier” similar to a designated driver.

Other gay rights groups expressed condolences and reminded the public about the probability of an attack on someone in LGBT communities.

“As a percentage of the state population, LGBTQ Floridians are at the highest risk of being targeted with a hate crime,” the organization said.

While the Orlando shooting has not yet been labeled a hate crime, roughly 20 percent of hate crimes reported nationally in 2014 targeted people based on their sexual orientation or gender identity, according to the most recent FBI statistics available.

“This tragedy has occurred as our community celebrates pride, and now more than ever we must come together as a nation to affirm that love conquers hate,” said Chad Griffin, HRC’s president.

Lambda Legal said details about the incident point to both a hate crime and an act of domestic terrorism.

“As an organization that fights every day for justice for LGBT people and people living with HIV, we also raise our voice this morning to say ‘No more hatred and violence against our community!’” said Fran Goldstein, Lambda’s acting executive director.

Goldstein also reiterated the need for the organization’s overall goals. “We will continue to stand up for the dignity and equality of every member of the communities we represent – to demand fair and effective responses from police and the criminal justice systems,” she said.

GLBTQ Legal Advocates & Defenders released a more hopeful and optimistic message. “(Saturday) in Boston we were celebrating the life force that is our community. Though it is dimmed today by this tragedy, that beautiful, loving, joyful force is something that will not be extinguished by violence or by hatred,” said Janson Wu, GLAD’s executive director.

The American Civil Liberties Union called not just for solidarity with the LGBT communities but Muslim communities as well.

“As we come together to heal from this tragedy, we must also continue to stand against any reaction to this horrific event that is rooted in hatred or bigotry in any form. We remain in solidarity with the Muslim community here in Florida and elsewhere,” the ACLU said.