Police nationwide step up readiness in wake of Orlando shooting 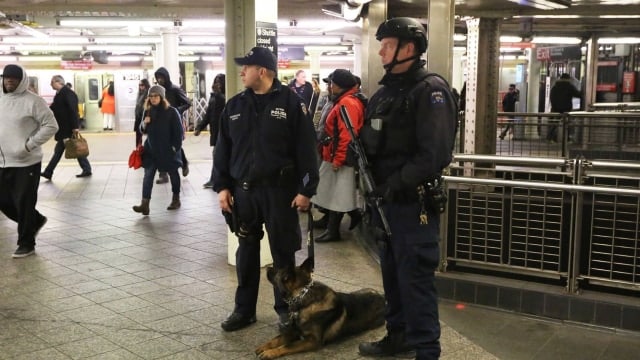 On the heels of a terrorist attack that left over 50 dead at a Florida gay club, law enforcement from coast to coast have gone on alert, paying close attention to public gatherings and LGBT events.

On the ground in Florida, Gov. Rick Scott (D) requested an Emergency Declaration under the Stafford Act from President Obama, asking for direct federal assistance both for victims and to the Florida Department of Law Enforcement to help with the “reduction of threats to public health and safety,” while local sheriffs urged calm and vigilance.

In New York, Gov. Andrew Cuomo ordered 1WTC lit in the colors of the pride flag in honor of the Orlando victims, and placed the State Police, Division of Homeland Security and National Guard on a heightened alert that included increased surveillance of transportation hubs and monitoring of large public gatherings, including various sporting venues throughout the State.

“Early reports indicate this was likely an act of domestic terrorism,” said Cuomo. “While there is no specific intelligence that suggests any link between the attacks that occurred in Orlando with New York, out of an abundance of caution, I have directed additional security measures at key points around the state as a precaution. The safety of New Yorkers and our state’s visitors is our number one priority, and we are remaining vigilant and in close contact with local and federal officials and our partner law enforcement agencies.”

The New York City Police Department placed its counter terrorism and emergency services units on alert, and issued a statement asouring residents of Gotham that there is no credible threat to the city.

“New Yorkers should know that the NYPD has more than 500 officers dedicated solely to terror response, hundreds more to the prevention of incidents, and is constantly working with law enforcement and community partners to counter terror,” said the nation’s largest police force in a statement Sunday.

Boston Police, Department of Homeland Security officials and members of the U.S Army conducted a previously planned counter-terrorism exercise at Fenway Park on Sunday, complete with K9s and drones to practice inter-agency cooperation in the event of a mass emergency. Local media reported that more than 1,000 volunteers participated as crisis actors.

In San Francisco, home to a large LGBT community, police there made it known they would be increasing presence in places of high public concentrations “including shopping, transit, and entertainment areas, the City’s Castro District and LGBT venues as well our mosques to ensure safety for everyone.”

Down the coast, Lt. Edward Ramirez from the West Hollywood Sheriff’s Department told media they made special arrangements for the Los Angeles Pride parade Sunday.

“We have instructed all deputies working the city of WeHo to have in their possession all of their response gear, which includes gear to respond to an active shooter situation,” said Ramirez. “We want to ensure the public that we do have a large law enforcement presence, and we encourage them to come out and enjoy the parade, music, food, and festivities.”

On the federal level, Department of Homeland Security Director Jeh Johnson put plans for an official trip to China on hold while Attorney Gen. Loretta Lynch advised numerous agencies are cooperating in the investigation into the Orlando attack and will continue monitoring developments.