In the past 36 hours of news coverage over the terrorist attack at an Orlando gay club that left at least 50 dead the killer’s semi-automatic AR-15 variant has often described as an assault rifle.

The gun used by the terrorist, a Sig Sauer MCX (which for the record is only AR-15 like and isn’t really even an AR-15) was purchased legally in in Port St. Lucie, Florida, on June 4, and has since been ridiculed and mislabeled in the press by Mother Jones (This Is the Assault Rifle Used by the Orlando Mass Shooter), the New York Times (Orlando Gunman Used Assault Rifle With Military Roots, Police Say by CJ Chivers no less! WTF), the Washington Post (The gun used in the Orlando shooting is becoming mass shooters’ weapon of choice), The New York Daily News (NRA’s fight to stop assault weapons ban enables killers behind shootings at Orlando nightclub, Newtown, and San Bernardino to use AR-15 rifle), USA Today (Ban assault weapons now: Our view) and so on and so forth, ad nauseam.

All this despite the fact that Florida, the Gunshine State, the state with more than 1.5 million concealed carry permits in circulation, does not have an “assault weapon” ban in place or definitions of just what an assault rifle is under Florida law. In fact, Florida’s weapon law definitions do not even contain the word “assault” at all.

Well, the good folks over at LGBT for Gun Rights posted this handy single-image guide to how to tell a regular AR-15 from an actual select-fire “assault rifle” using the standard military definition (hint, it’s in the selector switch behind the trigger group if you haven’t figured it out on your own). 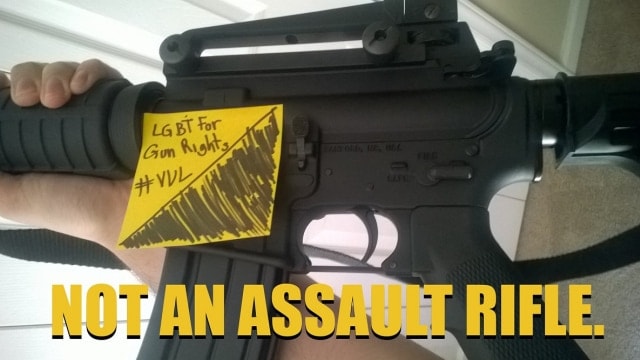