All 49 Orlando shooting victims have been identified 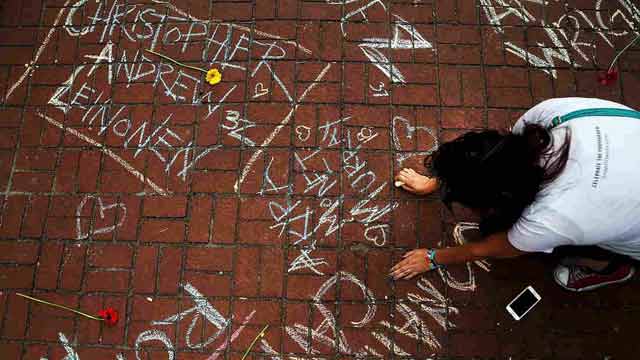 New York City residents write the names of the Orlando shooting victims in chalk across from one of the city’s iconic gay bars. (Photo: Spencer Platt/Getty Images)

Following the painstaking process of identifying the victims of the Orlando nightclub shooting and subsequently notifying the next of kin, authorities have now released the identities of all 49 victims who were killed early Sunday morning.

The overwhelming majority of victims were males, with the ages of all the victims ranging from just 18-years-old to 50-years-old. Most were in their 20s.

As details of the victims, their lives and who they were unfold, it is apparent that those who were killed came from all different backgrounds. And the support for those they left behind has been overwhelming.

“During this difficult time, we offer heartfelt condolences to the families of the 49 victims who lost their lives during the Pulse tragedy,” the City of Orlando said within the list of victims, which was published on the city’s website and continually updated as the victims were identified. “To the families and friends of the victims, your city is with you and will continue to be with you as you deal with this unimaginable tragedy.”

These are the individuals who were killed at The Pulse as they gathered with friends Sunday morning just before closing time.